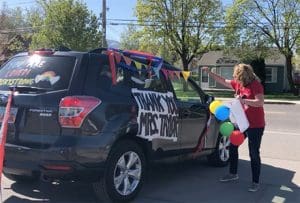 The staff and faculty at Midvalley Elementary had big plans for celebrating the end of the school year — plans disrupted by COVID-19. The Jr. Huskies haven’t been able to step inside their classrooms since mid-March when government officials placed all Utah schools under a soft closure as a preventive health measure. And they won’t be returning next fall to the 63-year-old school building, which is being rebuilt. So, to give students closure and a chance to say goodbye to their beloved schoolhouse, faculty and staff recently organized a “reverse-parade,” inviting families to drive through the parking lot to celebrate

Canyons District’s aggressive school improvement schedule continues with four schools slated for construction. Rebuilds of Peruvian Park Elementary, Union Middle and a school in the White City area will start in 2021, under a plan recently approved by the Board of Education to ensure the timely completion of the projects promised to voters with 2017 passage of a $283 million bond. The plan, which entails consolidating White City’s Bell View and Edgemont communities to be housed in a new school on the Edgemont campus, also calls for the construction of a new school in west Draper starting in 2023. To

There are a lot of reasons to rebuild Midvalley Elementary. Built in 1957, the school is Canyons District’s oldest campus. It opened the same year as the historic launch of the world’s first unmanned satellite Sputnik, a full decade before dot matrix printers were invented, and at a time when the latest teaching tool was an overhead projector. Cleaning chalkboard erasers was regarded a privilege, and duck-and-cover drills were the staple of school safety plans. But on Tuesday, April 16, as the community breaks out the shovels and hard hats for a groundbreaking ceremony to mark the start of the

As the sun sets on Midvalley Elementary’s 60th year, a new dawn arises for the Junior Huskies. Built in 1957 when a piece of candy cost .5 cents, frisbees were all the rage, and most of the area surrounding the school was farmland, Midvalley now serves a diverse and growing suburban population, and is in need of an upgradewhich it will soon be getting when it’s rebuilt with proceeds from a $283 million, voter-approved bond. No time is being wasted on the project, the first of four elementary schools to be constructed with the bond funds. NJRA Architects have been

With a Snip of the Ribbon, Indian Hills Cheers Renovation

Enthusiastic Indian Hills Middle students cut short their summers to take part in the grand opening of their newly remodeled campus at a ribbon-cutting ceremony held two days before the start of school. “This newly renovated school is for our students. It’s all for the students,” Principal Doug Graham told the crowd of parents, alumni, teachers and community members who also flocked to see the school’s bright, colorful new interior. “The community was generous enough to provide the funding for this school, and in turn I challenge our students to express their appreciation by dedicating themselves to being the best