The staff and faculty at Midvalley Elementary had big plans for celebrating the end of the school year — plans disrupted by COVID-19.

The Jr. Huskies haven’t been able to step inside their classrooms since mid-March when government officials placed all Utah schools under a soft closure as a preventive health measure. And they won’t be returning next fall to the 63-year-old school building, which is being rebuilt. So, to give students closure and a chance to say goodbye to their beloved schoolhouse, faculty and staff recently organized a “reverse-parade,” inviting families to drive through the parking lot to celebrate their hard work and cheer the start of a new chapter in the fall.

The event was a big hit for students and their parents, many of whom decorated their cars and vans with colorful signs and balloons. It was equally therapeutic for staff.

“We have students here whose parents went here and grandparents went here, and staff and faculty whose family members attended here,” says Midvalley Principal Tamra Baker. “All those memories as they walk through the building…I think that’s what they’re going to miss the most.”

A true neighborhood school, built in 1957 when a piece of candy cost .5 cents, Midvalley has served multiple generations within many families in the Midvale and Sandy communities. Originally surrounded by farmland, the school now serves a diverse and growing suburban population, and is in need of an upgrade  which it is getting with proceeds from a $283 million, voter-approved bond. It’s one of four major improvement projects now underway in Canyons District. Hillcrest and Brighton high schools also are being rebuilt and Alta High is receiving major upgrades.

All four projects are on schedule. In fact, the soft closure of Canyons’ campuses is buying construction crews a few weeks as they enter the summer building season, says CSD Business Administrator Leon Wilcox.

Midvalley has already been emptied of all its desks, chairs, cubbies, and computers  anything that’s not a fixture of the building  in preparation for demolition. The new Midvalley, located on the same campus, has been taking shape over the past year. Thirty classrooms at Alta also have been cleared to allow crews to install a new air conditioning system. In mid-May, crews at Brighton High will begin tearing down the old gymnasium and the “800-hall,” located in the south side of the outer circle of classrooms, to make way for the new gym. Crews also are getting a jump on smaller-scale projects, such as, the new parking lot at Draper Elementary, new roof at Jordan High, and the installation of skylights at the final seven of 18 elementary schools chosen for daylighting enhancements.

“We’re able to let crews inside the schools earlier than we could have if the schools were in session,” Wilcox says. “It won’t necessarily put us ahead of schedule, but it gives us more breathing room to get as much done as possible before schools start up again.”

Canyons also is moving forward with plans to consolidate the Bell View and Edgemont elementary communities to be housed in a new 684-student-capacity school to be constructed on the Edgemont campus. Work on the new school is scheduled to start in 2021 and be done in time for fall 2022. The rebuild of Peruvian Park Elementary also is expected to start in 2021.

Midvalley parents and teachers say, that as much as they’ll miss familiar surroundings, they eagerly anticipate having a new school. The community is hoping to get a sneak peek later this summer at a ribbon-cutting ceremony. More details about the event are forthcoming. 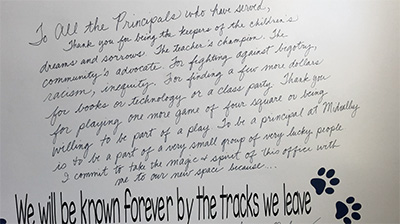 Baker felt it was important to give the community a chance to say goodbye. In lieu of having students leave messages on the wall, teachers wrote messages for them, inscribing students’ names on the brick-lined hallways outside their classrooms. Baker left her own message on the wall of her office as a tribute to all those who served before her.

“Thank you being the keepers of the children’s dreams and sorrows. The teacher’s champion. The community’s advocate,” reads a portion of the message. “To be a principal at Midvalley is to be a part of a very small group of very lucky people. I commit to taking the magic and spirit of this office with me to our new space.”

Teachers share in that sentiment and responsibility. “There are a lot of good memories here in every brick and every piece of tape on every wall,” says 13-year Midvalley teacher Rona Bresnahan, pledging to cherish those memories and carry those feelings with her for many years to come. 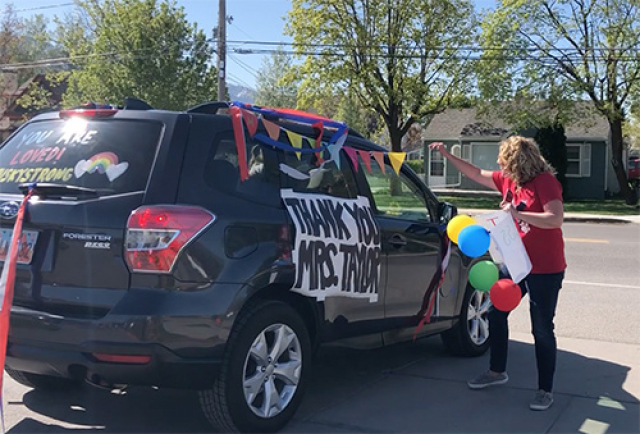