Zach Wilson, whose football career took off while playing for Corner Canyon High and skyrocketed at Brigham Young University, has a new home.

From Draper to Provo to — hit it, Frank — New York, New York!

And he’s not the only former Canyons School District star who’s getting a new NFL address.

As had been projected by pundits and football experts, Wilson, a bright quarterback with a cannon for an arm, was selected No. 2 overall in Thursday’s NFL Draft by the New York Jets.

“Congratulations to Zach on this amazing accomplishment!” Robins, Canyons’ Superintendent, exclaimed after the Jets made their selection. “Everyone in Canyons School District wishes him the very best in his future! #J-E-T-S! Jets, Jets, Jets!”

Wilson, who earned MVP honors with the Chargers as a senior despite an ankle injury that hampered his season, will have some Canyons School District company in his new league in Texas and Indiana.

Former Brighton High star wide receiver Simi Fehoko was drafted in the fifth round, 180th overall, by the Dallas Cowboys.

Football analyst Steve Muench gave the 6-foot-4, 222-pound Fehoko this scouting report on ESPN.com: “Fehoko is a big target with very good timed speed for his size. He tracks the ball well and he makes over-the-shoulder catches. He flashes the ability to make contested catches, but he also drops balls that hit him in the hands.”

Robins also tweeted out his support to Fehoko: “Congratulations to Simi! We are excited to see your future in Dallas! #NFLDraft2021 #WeAreCanyons #HowAboutThemCowboys.”

Fehoko only played through his junior season at Stanford, but it’s easy to see why he chose to move on to the next level considering he had 62 receptions, 1,146 yards and nine touchdowns with the Cardinal. He earned All-Pac-12 honors this past season after hauling in 37 catches for 584 yards and three scores in just six games.

The talented receiver finished with a bang, catching 16 passes for 230 yards and three touchdowns in Stanford’s double-overtime win over UCLA at the Rose Bowl.

A third stellar Canyons alumnus, former BYU linebacker Isaiah Kaufusi — a Bengal like Fehoko — earned his opportunity to make it to the NFL by signing wIth the Indianapolis Colts as an undrafted free agent over the weekend.

With Wilson, Fehoko and Kaufusi, Canyons has placed more players on NFL rosters this spring through the draft and undrafted free-agent signings than another school district in the state. CSD is also one of only two districts to have had two players selected in the draft. Bingham’s Jay Tufele (106th overall, Jaguars) and Dax Milne (258th overall, Washington) were drafted from the Jordan School District.

It’s believed that Wilson — or “Broadway Zach,” as some are joking him in homage to former Jets QB Broadway Joe Namath — will be the starting quarterback this fall. New York paved a path for Wilson to take over as QB No. 1 by trading previous starter Sam Darnold this offseason to the Carolina Panthers. They also traded up to get him some added protection up front in USC lineman Alijah Vera-Tucker.

“These guys need a good quarterback, a good leader, and I think I’ve got those qualities,” Wilson said. “I can’t wait to go in there. I love the coaching staff, I love everything they have to offer, and I can’t wait to get to New York City.”

No need to start spreading the news about the Big Apple-bound Wilson. He has been in the national spotlight since he put up big numbers while leading the Cougars to an 11-1 season and a No. 11 ranking in 2020. Wilson’s weekly quarterback clinic was one of the highlights in a college football season that was somewhat derailed by the COVID-19 pandemic.

The 21-year-old broke Steve Young’s completion percentage record by connecting on 247 of 336 passes (73.5 percent) while amassing 3,692 yards and 33 touchdowns with just three interceptions.

Corner Canyon football coach Eric Kjar was one of Wilson’s special guests at the NFL Draft in Cleveland this week. Kjar was with Wilson when the QB was a freshman at Jordan High and then as they both transitioned to the Draper school. Despite a late-season injury, Wilson threw for 2,986 yards, rushed for 752 yards and was accountable for 32 touchdowns.

“Just the talent popped off for sure,” Kjar told ABC4 Sports of what he spotted in Wilson early on. “At practice, you would see him do some pretty special things that you just don’t see every day.”

Fast forward to college, and that continued to happen — from the time he was a freshman all the way up to a Pro Day that flabbergasted many viewers because of his ability to throw from a variety of positions and against his momentum.

Wilson concluded his strong freshman season with an 18-for-18 passing performance with 317 yards and four touchdowns in BYU’s 49-18 win over Western Michigan in the Potato Bowl.

Wilson had a solid sophomore season despite a broken thumb and having undergone shoulder surgery in the offseason, finishing with 2,382 yards on 199 of 319 attempts along with 11 touchdowns and nine interceptions.

After spending the following summer training with former BYU quarterback John Beck, requiring lengthy — and now legendary — road trips to California, the 6-foot-3 gunslinger returned to Provo and put together one of the most impressive seasons in Cougar history.

Though overlooked coming out of Corner Canyon — he wanted to go to Utah and committed to Boise State before eventually picking BYU — a star was born this past football season.

“I think what sets Zach apart is his drive,” Kjar said in the ABC4 interview. “He’s a football junkie, and he wants to continue to get better. I think that will drive him and take him a long way.”

That’s certainly what the Jets hope — and believe, considering the high stakes involved with deciding who to take at No. 2 overall.

“He’s built for this. The main thing is, he’s a learning machine, so he’s always going to get better. I’ve seen it firsthand. We’ve seen that he’s got something special, and that’s why a lot of NFL coaches and GMs are excited about his arm strength,” BYU coach Kalani Sitake told the NFL Network. “He’s got the total package. I’m just waiting for him to get out there and show everyone.

“New York City is going to embrace him, because that’s what BYU fans did. They just love him for the things that he does and the person that he is. I think New York is going to be a great spot for him.”

Young, the Hall of Fame QB, former BYU great and Super Bowl champion, told ESPN’s Stephen A. Smith that NFL general managers and coaches couldn’t help but fall in love with Wilson after watching tape of him play despite what some consider mediocre opponents.

“They were seeing things that only veteran quarterbacks in the NFL do — the subtleness of how he plays, the sense of spatial relationship and how he moved. The subtleties of his game were so natural. You can’t create that. You can’t fake that. You either have that or you don’t. When you see someone who’s in college doing things that a pro does, you’re like, ‘Wait a second.’ Then you see the physical talent, the arm, the things Patrick Mahomes has the strength and talent to do.”

Young said he even believes Wilson could be better than No. 1 overall pick Trevor Lawrence.

“Don’t make a headline of it,” Young joked. “That’s the meteoric rise of Zach Wilson.” 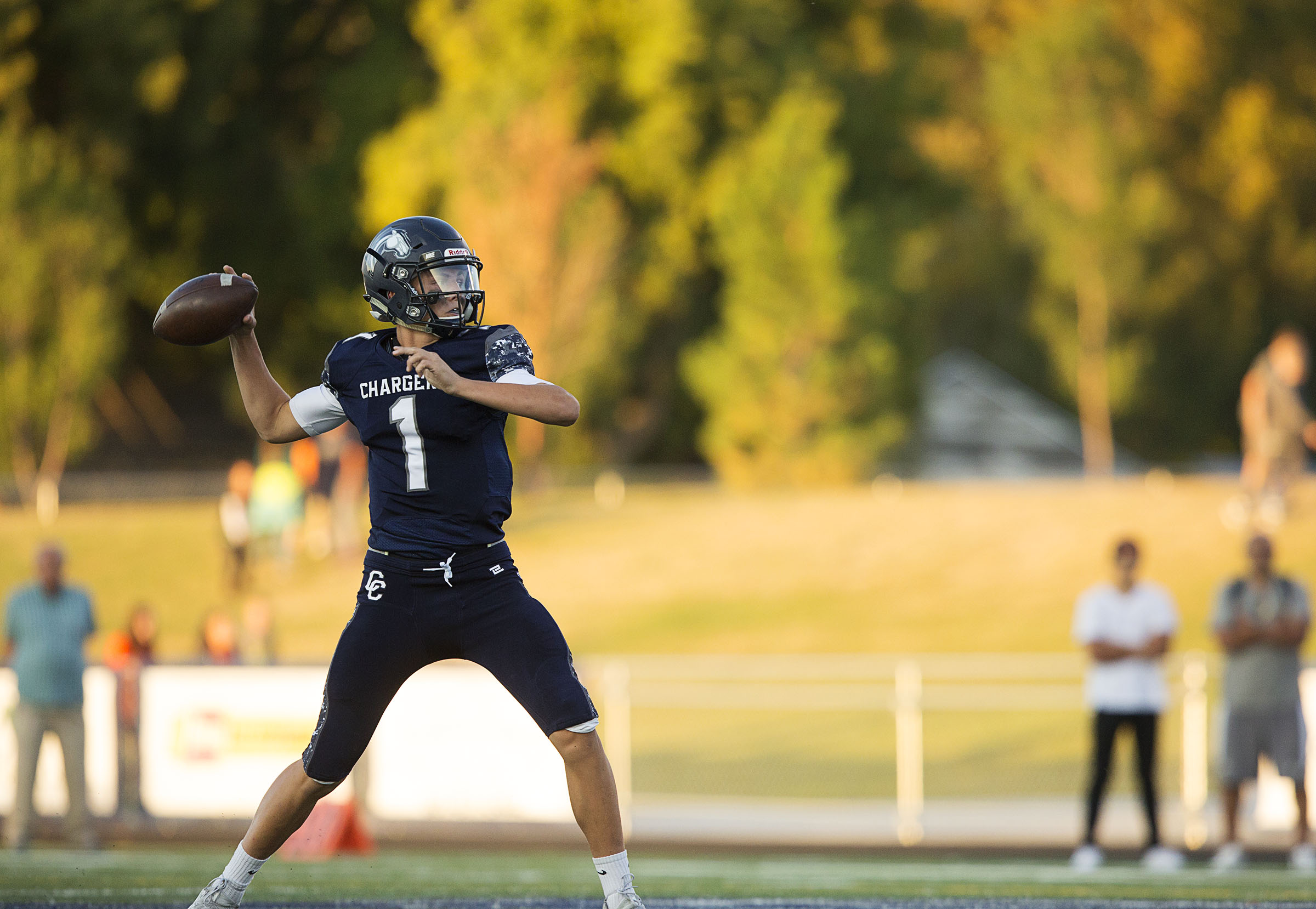