How’s this for some cool news? When the Bell View and Edgemont communities come together to form a new school, the school will be known as Glacier Hills Elementary.

Fittingly, the official school colors will be icy shades of blue and white. And the snow-loving mascot? Why, a Yeti, of course.

The new school’s identity was approved Tuesday, Oct. 6 by the Canyons Board of Education following a four-month research and development process that involved Bell View and Edgemont parents, students and staff members. Families and school staff were surveyed twice on their preferences from a shortlist of ideas generated by a rebranding focus group. Blue and white emerged as the favored color scheme, and the moniker Glacier Hills Yetis was preferred over the runner-up of Bear Park Bears by a margin of eight percentage points.

Steve Wrigley, the Board member who represents Bell View and Edgemont, thanked those who volunteered to participate in early brainstorming and focus group meetings as well as the final surveys. “I’m glad they chose Glacier Hills, which is unique for the school,” he said, noting how the new name will become a rallying point for the communities and source of school pride.

Construction crews will break ground on Glacier Hills Elementary this spring. While the school isn’t expected to open until August 2022, the branding process was completed early so as to provide artistic direction to the architects who have already begun designing the building.

The name Glacier Hills reflects the prominent glacier-cut canyons located to the east of the site for the new campus. Little Cottonwood and Bell canyons were cut by the longest glaciers in the Wasatch Range and the only glaciers to reach the edge of what was once Lake Bonneville.

“Our focus group made it clear they wanted a new identity to bring these schools together, something unique to set the new school apart and generate excitement about a shared campus and shared future,” said Julie Winfree who will serve as Glacier Hill’s first principal. “Together, Bell View and Edgemont have more than 115 years of history to build upon. When we asked parents and teachers what makes their schools unique, they came up with a surprising number of shared characteristics and ideals.”

Winfree on Tuesday thanked the Board for giving her the opportunity to help guide the development of the school. “I’ve really enjoyed working with the families and staff and getting to know them through the branding process,” she said. “The building is progressing weekly. It is going to be a beautiful building that will facilitate collaboration and learning. I look forward to being a Glacier Hills Yeti!” 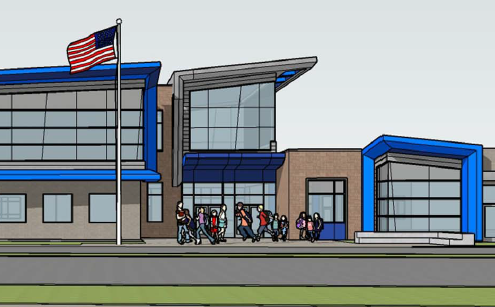 Coming in June: SAGE Results Available to Parents in Skyward

Former Midvale Mayor Remembered for her Support of CSD, Education