Treat this as inspiration to all the students who ever wondered if that English assignment was worth their time.

About a year ago, Butler Middle School student Emery Gallegos was assigned to read Roald Dahl’s “Charlie and the Chocolate Factory” and invent a soda — Willy Wonka-style. She and her sixth-grade peers were told there would be a competition to choose one effervescent confection to represent their school, and that the winning flavor would be made into a real soda to be produced and bottled in California and made available in the school’s “student incentive” store.

Gallegos didn’t expect to win, and she certainly didn’t expect her soda — a tangy berry-flavored twist on lemonade dubbed Sunset Blend — would be such a commercial hit. The pandemic delayed production of the soda by several months. But cases of the bright-red bottles arrived at select Utah and California retailers this fall, and the small-batch soda maker Real Soda in Real Bottles reports they’re flying off the shelves.

“My friends are super excited,” says the now 13-year-old Gallegos who got her first taste of Sunset Blend at an unveiling celebration held on Dec. 16 at her school. “They keep asking me, ‘Hey, Emery, when is your soda coming out? Hey Emery, when are we going to be able to buy it, where can we buy it?’”

Were it not for COVID-related safety precautions, Gallegos’ classmates would have been on hand for the unveiling to enjoy the “fizzy-lifting” fruits of her creativity. But Butler Middle Principal Paula Logan says bottles have been set aside for each of them to enjoy at a later date.

The two teachers behind the project, Rachel Sollis and Mark Sanderson, say more than 250 sixth-graders participated in the assignment and submitted flavor- and color-combinations, slogans and label designs, which were eventually put to a popular vote.

They were instructed to consider a product that someone would want to consume, and then challenged to present a mockup and present their best “elevator pitch” to a discerning group of soda company “executives,” their classmates. Students were graded on the clarity of their writing, their grammar, and the strength of their pitch.

“This project really gets to the heart of education. We learn things in the classroom, and we apply them to the real world, and because of [Real Soda] we were able to do that, bring the real world to the classroom in a tasty and fun way,” Sanderson says.

The chance to create an actual soda generated a lot of excitement. “It was a pretty heated competition,” Sollis says. “We had to do a tie-breaker vote.”

But Gallegos wasn’t distracted by the allure of a “golden ticket.” Like all great ideas, her inspiration bubbled from within. “I like doing watercolor paintings and thought the assignment sounded different, cool, and fun,” she said. “I didn’t want it to be a plain flavor. I wanted it to remind people of a place or memory. And I thought, ‘I’m pretty good at painting sunsets, and I enjoy doing that.’”

The colors of the sunset naturally gave way to the flavors she chose, strawberry, raspberry and lemon — not to mention her taste for “all things tangy.”

The project just kind of evolved from “what I like and what I like doing,” she says, “When I won the class vote, that’s when I thought, ‘Wow, OK, let’s do this!’”

Real Soda owner Danny Ginsburg stayed true to Gallegos’ concept, using her watercolor beach-scene for the label and relying on a flavor chemist to bring the drink to life. Bottled at a plant in New Mexico, the first cases were shipped to retailers in California and southern Utah. An outlet in Sandy, UT has purchased a batch, and Ginsburg is in negotiations with a large grocer in Sandy.

At Wednesday’s unveiling, he congratulated Gallegos and thanked the school for the opportunity to take part in the project.

“As we all get older, we look back on the teachers we remember who stimulated some interest in us when we were younger and not really sure what we wanted to do with our lives,” he says. “Doing an interactive and innovative project like this can really blossom into something, not just for the students who participate but for those who see what’s possible and are inspired.” 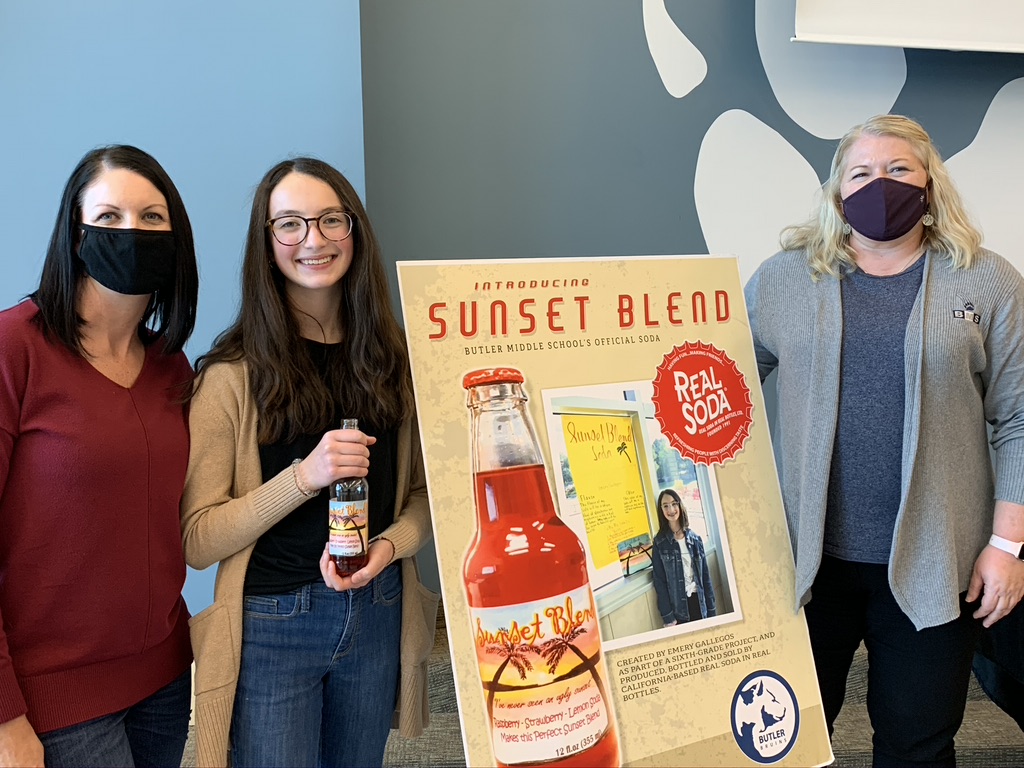