Brock Miller — the Utah State University basketball player and former Brighton High star who’s gained acclaim for his game and his trademark bald, headband-sporting look — started losing patches of hair when he was a 10-year-old kid.

Small patches turned into large patches. And even larger patches. Until it was all gone.

Despite undergoing various treatments for an autoimmune disease that causes hair loss — from receiving shots in his scalp to consuming pills he couldn’t pronounce — every last strand on Miller’s body, from head to toe, was completely gone by the time he was just 12. Sometimes, his hair would attempt a brave comeback, but then the clumps would fall out even quicker than they grew in.

Miller jokes that his sport is bald-friendly — “Nice thing about basketball, every person has the same hairdo,” he quips — but because of his autoimmune disease, alopecia aerata, the young man didn’t need a razor and shaving cream to get his head to be as smooth as MJ’s, Kareem’s, Shaq’s, Kobe’s or Karl Malone’s.

“It’s a great field of bald people,” he joked.

A great field in the NBA, sure. But Miller had a bald-is-beautiful experience throughout his teenage years in the Cottonwood Heights area. His maintenance-free ‘do, a characteristic that got people’s attention, wasn’t exactly common for someone like him.

“Being a bald basketball player in Utah was pretty rare,” he said.

When it comes to a combination of talent and character, though, Miller is right up there with the best of the aerodynamic and aerodynamically challenged ballers. Miller, the only former Canyons District athlete in the 2021 NCAA men’s basketball tournament, is an easy person to cheer for — on and off the court.

Though alopecia can wreak damage on self-esteem of young and old alike, Miller considers the uncurable condition to be a blessing.

“I’m really grateful that I got it. I wouldn’t have it any other way,” Miller said. “I hope my hair never grows back.”

Miller chuckles as he admits one valid reason for liking his bald head. “My wife loves it.”

Having a great attitude doesn’t diminish the fact that it was also an immense psychological challenge. He was an easy target for taunts. You can imagine what youths in school and opposing crowds might say to get under the skin of a smooth-shooting athlete who happened to drop in buckets quicker and as effortlessly as hair fell off his head.

Bullying and teasing didn’t have the effect some might have expected. Sure, Miller didn’t like being the subject of jokes, but the occasional negative attention strengthened his character. He overcame it. It fueled him. And, best of all, he grew determined to help others suffering from the same condition.

“It’s helped me to be able to look outside of myself. I’ve been in situations where you get bullied and people pick on you, make fun you,” he said. “I’ve always been the type to reach out to those who in the same situation. It’s really taught me humility and to be a kind person overall.”

Miller has a soft spot in his heart for everybody who has been diagnosed with alopecia, but especially for women and girls. He knows how tough it can be on them. And he’s determined to help as many with the condition as he can.

Brielle Grange, then 12, had just lost all of the hair on her body due to alopecia universalis when she and her family were blessed by his thoughtfulness. Miller invited them to a USU game at the Spectrum, and had the Grange family sit next to his parents. They chatted it up all night. Following the game, Miller introduced Brielle to USU team manager Ryan Corbett, who also has alopecia.

Miller invited the Granges to his wedding reception the following summer (2019). When Brielle arrived, Miller excitedly took her around and introduced her to friends and family.

“He’s one of the greatest. … (He) wanted to show her that alopecia won’t stop her dreams,” Janan Grange said. “I contacted him and, even though we hadn’t met, he invited our family to a game and to meet him after. It was a highlight for us. He made her whole year.”

That wasn’t a one-time thing for Miller. He’s willingly met with multiple kids and families who’ve reached out to him for hope. It’s no wonder he’s a fan favorite in Logan, just like he was at Brighton.

“It’s been great to be able to put myself in the position to be a college athlete and have success to be a part of giving young kids that have Alopecia hope,” he said. “It inspires them to realize that they can use this challenge for their benefit to bless other peoples’ lives. I take it very seriously when people reach out to me. … I want to get to know each of them that does reach out.”

That goes for kids and adults alike.

Miller laughs when he gets teased about sporting a headband. It’s not just to look cool. He literally has no hair, not even eyebrows or eyelashes, to hinder sweat from soaking and stinging his eyes. The headband is a necessity, not a fashion statement. He likes the bald, ‘banded combo, though.

Miller likes that it brings extra attention to him. People notice that he stands out as a person and as a player. He loves showing others they can play and succeed through adversity.

“I want to be a good example,” Miller said, “and to represent my family name and the schools I’ve played for, the teams I’ve played for and the people I play for in the right way.”

Miller jokingly says he feels “kind of old” when reminiscing about his Brighton High playing days. That is not a bald joke, either.

A lot has happened since the former Bengal standout earned first-team all-state honors for leading Brighton to the 5A championship game in 2015. He’s served an LDS mission in Argentina, twice merited Academic All-Mountain West honors, graduated with a bachelor’s degree, commenced work on an MBA, gotten married and become a reliable contributor who’s helped USU earn three trips to the NCAA tournament.

Miller, who still has two years of eligibility, is gearing up to participate in The Big Dance for what should be the third time. USU won the MWC tournament last spring, but the NCAAs were canceled due to COVID-19. Miller said the Aggies have been hungry to play in March Madness again since losing to Washington in the first round in 2019.

“It’s exciting anytime you get to play in this tournament,” Miller said. “We want to make a run. We’re not just happy to be here. We want to win.”

Even though he’s now an Aggie and hopes to eventually become a professional basketball player, Miller will always remain a Bengal at heart. He’ll always play to represent his roots. He keeps in touch with his Brighton coach, Jeff Gardner, and other friends from the school.

“I had great experiences (at Brighton),” Miller said. “No question you take pride in where you went to high school. All my brothers and I played there.” 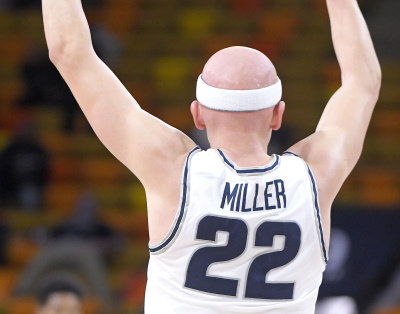