Joani Richardson is the kind of teacher who can breathe new life into words, pull magic from a page, and spark wonder in the eyes of eager-to-learn children. “I love to teach children to love to read,” says Richardson. “I have failed if I have not taught a child to love to read.”

For her dedication to inspiring her first-grade students at Altara Elementary to learn and grow, Richardson, who is beloved by scores of students, parents and fellow educators, has received one of the most prestigious awards given to public-school educators in Utah.

On Friday, April 28, 2017, in front of cheering Altara Kittyhawks of all ages, Richardson was announced as a winner of a Huntsman Award for Excellence in Education. She’s one of 11 Utahns selected for the honor, which comes with a crystal obelisk and a $10,000 cash prize. The winners  six general education teachers, three administrators, one special-education teacher and a volunteer  are hand-picked by a panel of prominent citizens and educators after a public-nomination process. Awards will be given at a May banquet in Salt Lake. 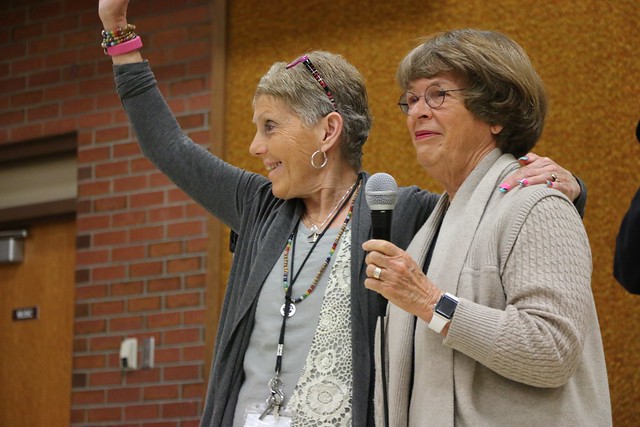 “Every year, our family has the opportunity of going all over the state of Utah,” said Karen Huntsman, the philanthropist and wife of billionaire businessman Jon M. Huntsman Sr., who delivered to the news to Richardson personally at an assembly. “You know what they we are looking for?  Outstanding teachers.”

At the Friday morning assembly, which was attended by Richardson’s family (some had dialed in via FaceTime on iPhones), Principal Nicole Svee-Magann, Superintendent Dr. Jim Briscoe and School Performance Director Alice Peck, Huntsman pulled Richardson close and said, “She doesn’t teach for the money,” Huntsman said.  “She teaches for the love of teaching.”

Svee-Magann is effusive in her praise of Richardson, who has taught for some four decades. The principal calls her a top-notch teacher who doesn’t let anything  not even breast cancer  slow her down. Even while undergoing chemotherapy treatment, she said, Richardson ran last Saturday’s Salt Lake Half-Marathon.

“Sometimes when we have hard things happen, we have to keep going. We have to keep going forward and making a difference. This good woman is the best example of this that I know,” Huntsman added. “When hard things happen, do you think she forgets her students?  Do you think she forgets her lesson plans?  She does everything because she loves and cares about what she’s doing.  When you think about all the children she’s taught … she has impacted their lives for years and years and years.”

Richardson’s selection extends Canyons District’s streak of being home to a Huntsman award-winner. Last year’s winner from CSD, Brighton High’s Aaron Hadfield, was at Friday’s assembly to surprise Richardson with the news. But he was there in a different capacity  as a volunteer in the WatchDOG program for fathers. Also, his wife, Jody, is the School Community Council chair at Altara and was the driving force behind Richardson’s nomination.

Board of Education Honors 13 with Apex Awards

Exceptional Teachers Recognized for Enriching the Lives of Exceptional Children