Two Canyons District employees  a teacher and an administrator  were recognized this month for their contributions to the rapidly-growing field of language immersion.

You Yin-Yao, a Dual Language Immersion teacher at Draper Elementary, was named the International Teacher of the Year by the Utah Foreign Language Association (UFLA). He received the award Thursday, Feb. 9 during a conference at Utah Valley University. The plaque he received says the award is “in recognition of his energy, his industry, his caring, and his tireless dedication to the students at Draper Elementary, Canyons School District, and the teaching of Chinese language and culture.” 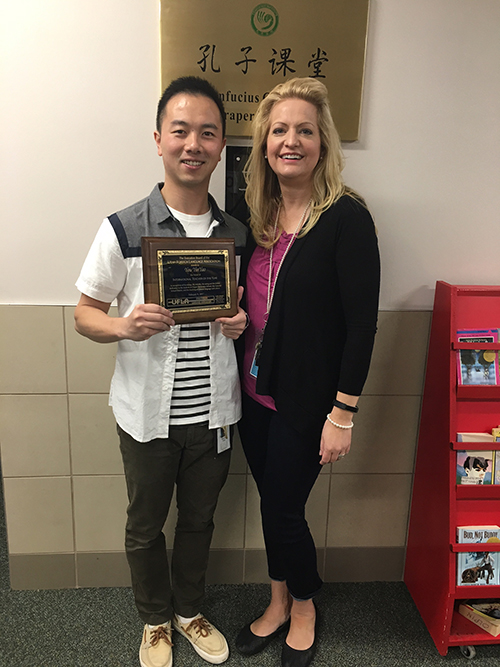 association’s Lifetime Achievement Award for her role in launching and growing Utah’s immersion program under the direction of legislators and former Gov. Jon Huntsman who is fluent in Mandarin and served as U.S. Ambassador to China.

A model of bilingual instruction dating back to the 1960s, immersion programs are surfacing in classrooms around the globe as the most efficient path to proficiency in a wo

rld language. Children in dual language immersion programs spend half the day learning core subjects in English and the other half learning in a target language, such as, Spanish, French, Chinese and Portuguese.

CSD’s first immersion classes opened in 2009, the same year that the District was founded. The District is now home to 14 elementary and secondary school immersion programs. Statewide, nearly 10 percent of all elementary students are learning a world language through the program which extends through high school where, if they’ve passed an Advanced Placement exam, students can start taking college-level courses for early college credit.

Wade got her start in education as a special education teacher. She has 23 years of experience in elementary administration, including seven years as a principal at an immersion school.