Alta senior Josh Davis is a force to be reckoned with both on and off the football field. He’s Alta’s go-to for carrying and running the ball, he’s scored 72 touchdowns and he earned 5,290 rushing yards as a Hawk. But Davis is also a dedicated student, with a GPA of 3.86, and he spends his time volunteering in the community and helping in a retirement home.

In recognition of his accomplishments, Davis was selected as the 2016 Utah Gatorade Player of the Year. “The award, which recognizes not only outstanding athletic excellence, but also high standards of academic achievement and exemplary character, distinguishes Davis as Utah’s best high school football player,” the Gatorade organization wrote in a news release about Davis’ recognition.

Davis is the third Gatorade Utah Football Player of the year to be chosen from Alta in 32 years, and the fourth in the Canyons District. Previous winners include Brighton’s Simi Fehoko, who won the 2015-2016 award, and Jordan’s Austin Kafentzis, who won in 2012-2013 and 2014-2015. 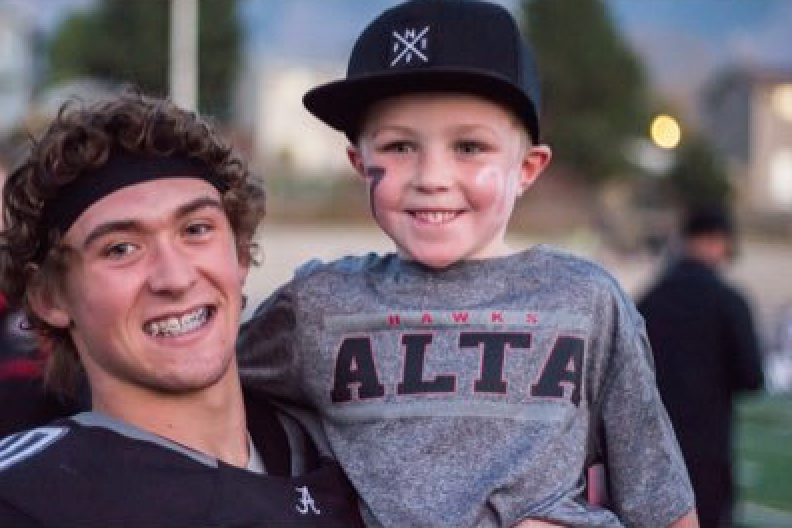 The coveted title is one of many claimed by Davis over the years. The 6-foot, 170-pound running back is a two-time pick for KSL-TV Game Night 4A MVP and the All-Tribune team. This year, he was named to The Tribune’s All-State Team and was dubbed an MVP by the Deseret News. If that wasn’t enough, Davis was hand-picked for the USA TODAY High School Sports’ 2016 American Family Insurance ALL-USA Utah Football Team.

Davis has been credited with helping to revive Alta’s storied football program, and push his team to the Class 4A semifinals this year. He scored 28 touchdowns in his senior year and finished the season with 2,645 yards, breaking the state single-season record for all-purpose yards and averaging 203.5 yards per game. Davis is so fast he even qualified for the finals of the 100-meter dash at the state track and field championships last spring.

“The kid can run inside, he can run outside, and he’s so explosive, so you can’t get a headshot,” Alta coach Alema Te’O told the Salt Lake Tribune. “Plus, he blocks well, he catches the ball out of the backfield, he’s a threat on special teams  he’s by far the best running back I’ve ever been associated with in my career at the high school level.”

Davis graduates this year, but fans may soon be able to see him take the field for one of the many colleges that have reportedly extended him offers, including, Air Force, Army, Weber State and Southern Utah.