Never doubt that small changes can make a big difference. What started as a suggestion by a concerned Canyons School District parent has grown into a Board of Education-approved campaign to reduce schoolyard idling during morning drop-offs and pickups.

On Earth Day, Canyons became the first school district in Utah to go idle free at all of its schools. The campaign kicked off early in the morning at Ridgecrest elementary school where “no idling” signs were installed and students greeted drivers with placards, informational pamphlets and window clings to place in vehicles. Eventually, signs will be placed at all Canyons schools and “no idling” pledges will be sent home with students, encouraging parents to voluntarily pledge to “turn their key and be idle free.”

The idea originated with a parent, Cindy Boyer, who dropped by Superintendent Jim Briscoe’s office just over a month ago to share her frustration at seeing exhaust billowing into the air at her child’s school’s parking lot. Briscoe took her concerns to the Board of Education, and within a matter of weeks, the district’s “no idling” campaign was born.

Air quality along the congested Wasatch Front has improved. But Utah still has two of the nation’s seven worst cities for air pollution, according to the American Lung Association. The Utah Division of Air Quality says 38 percent of the state’s air pollution comes from cars and trucks  some of it from idling vehicles. Monitoring at schools in other states has shown elevated levels of pollutants during drop-off and pickup times. And because Kids breathe about 2 gallons of air a minute, and their lungs are still developing, they are more susceptible to the harmful effects of pollutants.

“Besides educating students, I feel we have some responsibility for their health, and their future health,” said Briscoe, noting that projections show school enrollment doubling in the Canyons District area over the next 30 years.

Hundreds of Utah schools have implemented idling reduction programs under an initiative spearheaded by the Utah Clean Cities Coalition. Canyons is the first to take it districtwide, according to the non-profit’s northern coordinator Tammie Bostick Cooper.

But the initiative is really a community affair. Utah Clean Cities and Cottonwood Heights have provided no idling signs and educational materials. Officials with Salt Lake County Health Department are taking a census of idling cars outside schools before and after the campaign launch. And each school in the district is finding creative ways to engage students and spread the message.

Many Canyons schools, and all of its buses, have been idle-free for some time, said Canyons Energy Specialist Christopher Eppler. Copperview Elementary is having students in grades 3-5 write argumentative essays about the benefits of reducing idling. And on Friday, Ridgecrest held a “no idling” assembly to honor fifth-grader Kaleb Broderick who, in a handwritten letter, recently urged Cottonwood Heights to install no idling signs near public parks. The city agreed and donated an extra sign to Ridgecrest.

Reducing idling is easy to do. It protects our health and improves our air quality. It also saves money on gas. A few seconds here or there adds up over time, said Canyons Board Vice President Nancy Tingey at a recent board meeting. “I would hope every one of us would look at our own habits and consider what tiny changes we could make to improve our air quality.”

Other ‘Healthy Schools’ Steps at Canyons 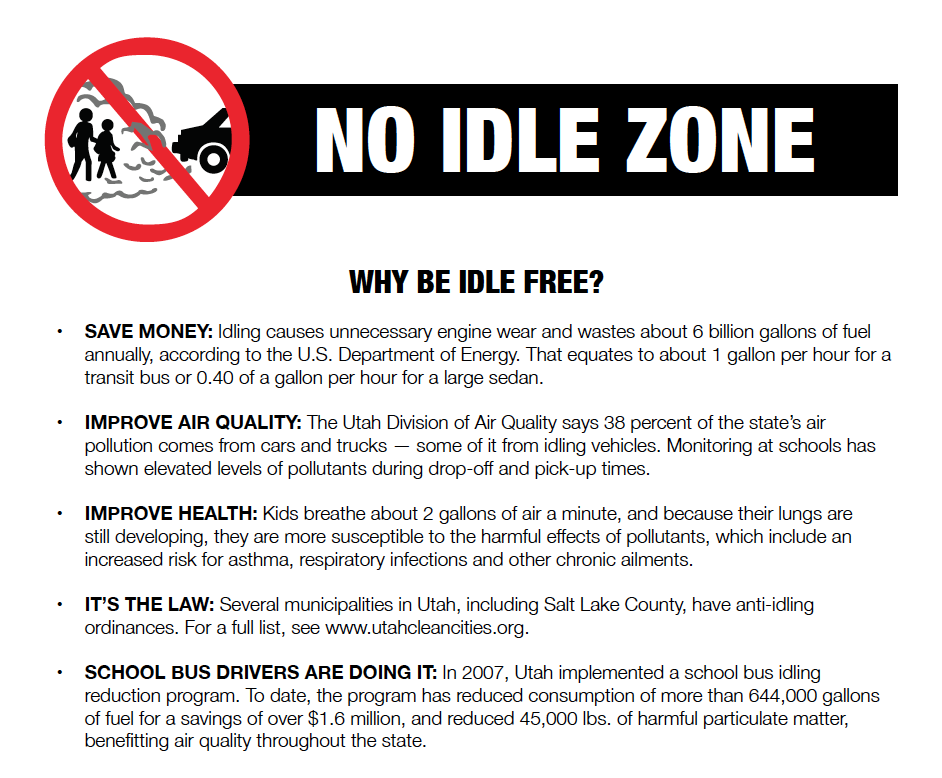