Hillcrest High’s auditorium has been reinvented as skate park for the flashy arrival of “Starlight Express,” the rock musical by Broadway legend Andrew Lloyd Webber.

Hillcrest is the first high school in Utah to stage the ambitious show, which is about toy trains that spring to life through a child’s imagination. Throughout the production, which features elaborate costumes leased from the Tuacahn Center for the Arts, audiences will be surrounded by racing “trains” of student performers on rollerskates, Heelys and skateboards. Students even do back flips from a giant half pipe on the stage.

Teacher Josh Long says the 32-student cast, made up of students in the school’s Production Company, has spent nearly a year taking trips to local skate parks and roller rinks in preparation for the rigors of this production. It’s certainly not easy for teen actors to recite lines, sing and dance in front of packed houses. It’s doubly difficult while on skates.

A handful of student performers in “Starlight Express” became accustomed to performing on skates during this fall’s “The Wiz.” Cast members appeared as the “flying monkeys” so they could get used to careening down aisles and across the stage.

“They are still falling all over the place,” Long said with a laugh during a recent rehearsal. “The big thing we have been focusing on in all our shows is to push ourselves and to do things that are scary … It’s made the kids understand that they can do hard things.”

Junior Austin Blake, cast as Tank, has taken about a dozen rough tumbles while rehearsing. He says he’s glad his costume “has a lot of padding.” Blake says he started skating last spring when he was accepted by audition into the Production Company and learned that a ride on the “Starlight Express” was in his not-so-distant future.

Other recent Hillcrest productions, such as the two-night, six-hour “Nicholas Nickleby,” have been mentally challenging, he says. This part, as a black leather-clad, roller-skating gang member, is physically demanding, he says.

“Once you get over the fear,” he says about his rapid-pace role, “you just keep doing it and doing it. Eventually, you get it.”

“Starlight Express” will play Thursday through Saturday, May 15-17. Tickets are being sold in the Main Office. Cost is $10 for reserved premium seating and $8 for general admission. The doors will open at 6:30 and the show starts at 7 p.m.
each night of the show. 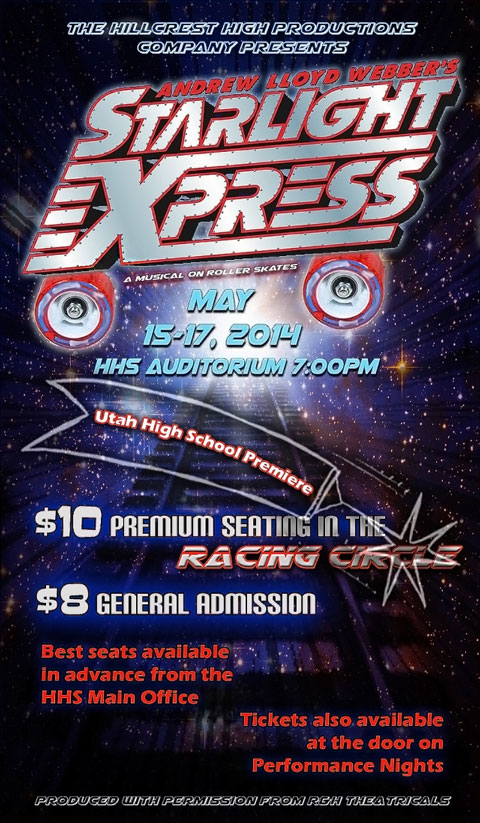 Corner Canyon’s Clark is UHSAA Music Educator of the Year