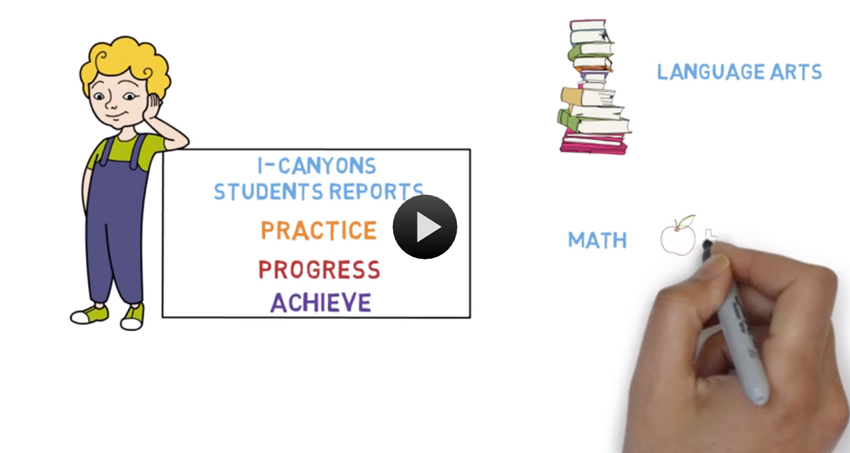 Was this video helpful?

Click Here if you have trouble viewing the video

What’s new on the Student Reports

The updated I-CANyons Student Reports will give parents of elementary school students a progress report for Term 1 and Term 2, and an End-of-Year Summary issued after Term 3 to reflect students’ mastery of standards.

Term 1 and Term 2: How Your Student Is Progressing
The three indicators in Term 1 and Term 2 to report an elementary school student’s understanding and progress toward mastery of the content are as follows:

Term 3: How Your Student Did
An End-of-Year Summary is provided following the close of Term 3 at the end of the school year. It will contain three indicators that reflect mastery of the standards:

In the past, student grades have included subjective factors like attendance, effort, and attitude. In theÂ I-Canyons Student Reports, student mastery and work habits are reported separately in order to give a more accurate report of student progress. The updated I-Canyons Student Reports reflect a student’s current understanding of the content, as well as a student’s progress toward understanding the content.

Unlike letter grades, the I-CANyons Student Reports do not average lower scores that may have been earned in the beginning of the semester. This format is designed to give parents a clear understanding of what students have learned as a result of their experience in school. It also gives parents and teachers the tools they need to identify precisely where each individual child needs help.

The I-Canyons Student Reports show student progress toward mastery of learning standards. They were crafted by CanyonsÂ District educators over two years’ time and used in 92 classrooms in six CSD schools in 2012-2013 before their debut in the 2013-2014 school year.

The reports, updated for 2014-2015, will give parents specific information about their child’s understanding of the content, now in a more informative, user-friendly format. They also give teachers and parents tools to help students succeed.

The I-Canyons Student Reports contain separate reports of the following:

Details about the I-CANyons Student Report can be found in the modules on this page. Should you have additional questions, please contact your child’s teacher or school’s office, or e-mailÂ grading@canyonsdistrict.org.Â

Learn about grading & reporting from an internationalÂ expert: Ken O’Connor, author of two best-selling books, “How to Grade for Learning, K-12” and “A Repair Kit forÂ Grading: 15 Fixes for Broken Grades.”Â

Parents – Why and WhatÂ

Parents – Why and What full

O’Connor, otherwise known as “The Grade Doctor,” offered a free workshop titledÂ “Changing Assessment and Grading: What and Why?”Â for parents, patrons and guardians of children in Canyons schools in summer 2014.Â O’Connor also conducted separate workshops withÂ Canyons District principals and administrators during his visit to the District. A video of O’Connor’s presentation can be found atÂ iTunes U.