A family-friendly park tucked away in a corner of a cozy Sandy neighborhood will bear the name of a Canyons District employee and longtime Sandy City Councilman who has dedicated much of his life to the betterment of the place he calls home.

For his contributions to the city and its residents, the former Center Street Park, 8920 S. 150 East, has been re-named after Scott Cowdell, the District’s Custodial Coordinator and 23-year member of the Sandy City Council. The announcement was made during Sandy’s annual Appreciation Awards on Tuesday, Feb. 19, 2013.

The park-naming honor wasn’t the only surprise for the Cowdell clan that night.

Cowdell’s son, Tracy, an inaugural member of the Canyons Board of Education, received the Outstanding Service Award. Then, to Scott Cowdell’s great surprise  with his wife Betty, five of his children and 92-year-old mother Isabela in the audience  he received one more accolade: The Noal Bateman Award, Sandy’s highest honor.

“It was quite a night for my whole family,” he said.  The news about the park left him speechless. And he became “overwhelmed” when Sandy dignitaries presented him with the Bateman award, named after a former Sandy mayor, he said.

“I couldn’t even talk.  Everyone who knows me knows that doesn’t happen very often,” said Cowdell. “I was basically in shock.  I thought, ‘You’ve got to be kidding me.'”

Visitors to the newly named Historic Sandy Scott Cowdell Park, which is flanked by public transit stations and a walkway connected to the city trail system, can enjoy an outdoor pavilion, barbecue pit, playground, grassy play field, and restroom facilities. Cowdell, who lives within walking distance of the park, says he and his family have used the park for good-weather family get-togethers and parties.

“As a lifelong resident of Sandy and having zealously served on the City Council for more than 23 years, Scott has certainly earned this honor,” says Sandy Mayor Tom Dolan. “His service and sacrifice have been felt throughout Sandy, with notable accomplishments being the securing of funding for infrastructure improvements in our historic district, advocating for arts expansion and the development of new city parks and open space.”

See more about the Historic Sandy Scott Cowdell Park in the Deseret News. 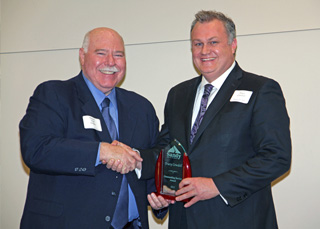 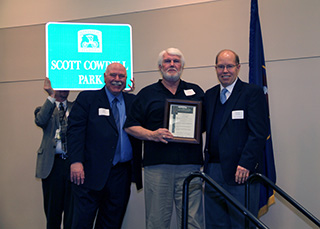 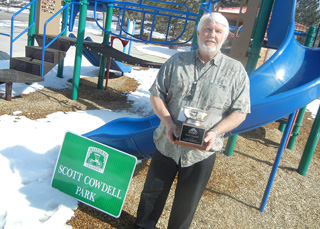 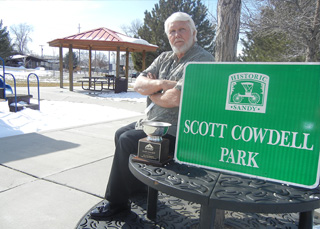