It was a fitting end to a standout season for the Chargers. Days after helping his team achieve victory at Utah’s 6A Football Championships, Corner Canyon High’s strong-side defensive end Van Fillinger was awarded his All-American Bowl jersey before an auditorium of cheering peers.

To be chosen for the All-American Bowl is a rare distinction reserved for the nation’s top players. Fillinger, ranked Utah’s No. 2 football recruit, is among three players chosen from the Beehive State to play for the western team. 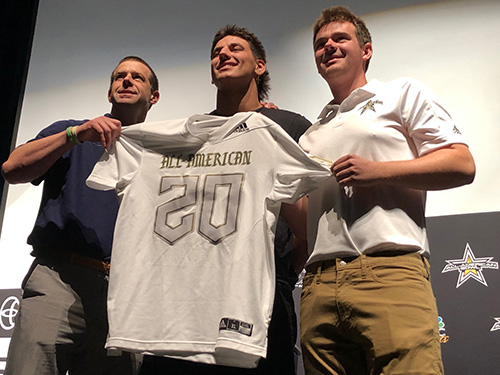 “It’s a pretty big step,” Fillinger told KSLTV, an affiliate of NBC, which will air the All-American Bowl on Saturday, Jan. 4, 2020 at noon. “There’s really nothing more that I could ask for from my high school experience. I was lucky enough to take part in two state championships and now I’m getting to play in the All-American Bowl. It’s been a dream ever since I was little. It’s really a blessing.”

Fillinger credits the support of his family and his coaches, and the competitive camaraderie of his teammates. Originally committed to play collegiately for the Texas Longhorns, the back-to-back Utah state champion de-committed and is back on the market with at least four college offers already extended. He was named to the Deseret News’ 2018 5A All-State first team his junior year during which he helped lead the Chargers to a championship victory and was credited with 65 tackles and 5 sacks. He also was named to the 2018 American Family Insurance All-USA Utah Football Team.

The Chargers’ head coach Eric Kjar says Fillinger is deserving of these honors. At 6-3 and 255-pounds, he is a strong and gifted player, but what really distinguishes Fillinger, says Kjar, is “his dedication and the way he practiced” and performed every day on the field.

Jumpstart Your Child’s Education At a Canyons District Preschool