Chemistry is a challenging discipline. There are up to 118 elements to commit to memory and a language to learn for expressing chemical equations, not to mention the math involved.

But Gretchen Carr believes the reason most students find it difficult is they’ve been told it’s difficult. “Chemistry is notoriously hard. But so are a lot of things,” the Jordan High Chemistry teacher says. Trouble is, while some students shrink from challenges and seem devastated by small setbacks, others persevere and view setbacks as part of the learning process, exhibiting what’s become known in education circles as a “growth mindset.” It’s a term coined years ago to describe how some people perceive learning and intelligence as acquirable through hard work, instead of believing we’re born with fixed talents and abilities. It’s also something Carr is striving this year to teach her students along with the Periodic Table and acid-base reactions.

“I find a lot of kids are afraid of failure and they don’t want to go through the learning process of trying it and revising their work, and trying it again and revising it again,” Carr says. “So, I’ve made it a goal to make all students feel more welcome and free to make mistakes without people, including their classmates, coming down on them.”

Teachers have long understood that there’s more to school than reading, writing and arithmetic. So much of what students glean from their time in the classroom, the lunchroom, or interacting with peers has to do with developing the life skills and character traits they’ll need as adults. Increasingly, however, schools are becoming more sophisticated in how they approach these life lessons. 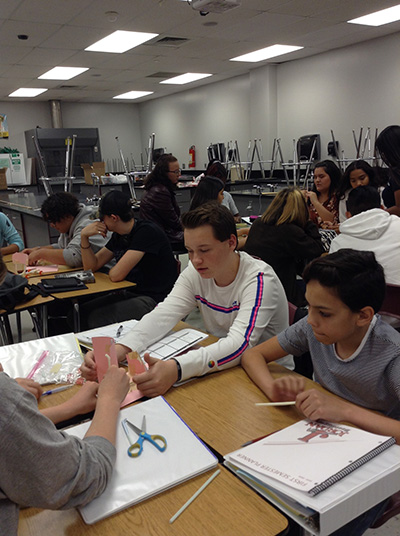 As students bustle into Carr’s classroom, they’re greeted by a sign that states, “Chemistry is hard. You can do hard things.” It’s Carr’s go-to statement with the going gets tough. Only this year, to help set the tone, she also shared with students a TED talk by Carol Dweck about the power of the word “yet” to reframe feelings of inadequacy.

“Instead of saying, ‘I’m just not good at math or chemistry or sports,’ you say, ‘I’m just not good at chemistry, math or sports…yet,'” Carr explains. It’s a word that can trigger confidence and renewed enthusiasm for learning, and build character-traits, such as the resilience to persist through failure, Dweck and her colleagues have found. The growth mindset, in other words, is teachable, and science is a surprisingly natural starting place.

Iteration is integral to the scientific process, which is an important lesson for students to learn in preparation for college and the knowledge-based careers of the future, believes Carr who has come up with some creative ways for students to comfortably practice observing, experimenting, revising and trying again.

On the second day of school, she tasked teams of students to build Go Karts from a handful of straws, Life Saver candies and some paper and tape. “It was an engineering exercise, and most of the students would call the first running of the Go Karts their great first flop,” she says.

But that’s the point. Initially, students assumed they were racing. But when they learned they would get a chance to improve upon their designs, and were told it was a success if their second design went further than the first  even if by a few inches  that’s when they got excited, Carr says. “Now, when I talk in class and mention the growth mindset, maybe they’ll recognize it’s time to take courage, experiment and not give up.”

Discussing the growth mindset in class is something that happens to be outside Carr’s comfort zone. “I’m no expert in this,” she says. “A psychology or English class seems like more of a forum for teaching this kind of thing.” But she’s feeling pretty positive about the experience and believes it’s making a difference for some students.

It takes some forethought and planning, but doesn’t take anything away from her daily instruction, Carr says. Like any good scientist, she’ll continue observing how different strategies work and make adjustments as needed. “We’ll see how it plays out throughout the year,” Carr says. “I’m sure there are ways I can build on it.”

Contact Tracing, Isolation and Quarantines Only We Can Prevent Coronavirus, and Here’s How