Josephine Garrett knows what it’s like to meet a hero in real life.

Last year, as a student at Draper Park Middle, she decided to enter the National PTA Reflections program to tell her story. The program encourages students from all grades and abilities to explore the arts and express themselves through a variety of mediums, from literature to music composition. With the 2019 theme of “Heroes Around Me,” Josephine, known to her friends as Josie, knew just what to do.

She looked to her neighbor, who had just been diagnosed with terminal cancer, for inspiration. Her neighbor, although sick, had decided that she would perform acts of service for her last 12 months of life, and as Josie watched those acts unfold, she was moved. “She was amazing,” Josie said later. “She was a real hero.” 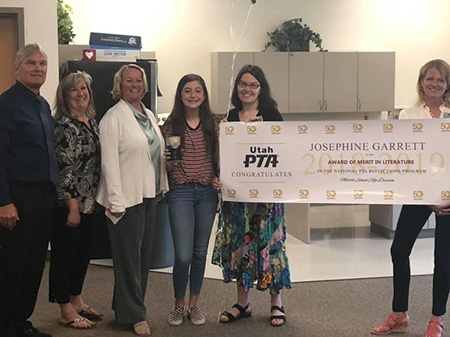 First, Josie, who is now a student at Corner Canyon, submitted her entry on the school level. She won there, so she moved on to the next level, competing against several other schools. From there she progressed to the District level, then region level, and finally, she made it to the state level of the Utah PTA, where her essay, titled “Day By Day,” was selected to move forward to the national level of the competition.

“Hero-like characteristics are in everyone. We just have to find them,” Josie wrote in her essay. When asked how she defines a hero, the subject of Josie’s piece, Annette Ferran said, “Someone that inspires someone to be better and give hope.” Josie agrees and wrote about how Ferran “inspires everyone to be a hero by doing service. … Tomorrow gets better all of the time living by Annette’s exampleday by day.”

Josie found out that she was selected as a Merit Award winner just a few days after her neighbor passed away. Her entry was selected from submissions from some 5,000 local PTAs from throughout the country. For her award, Josie received a bronze medal, a Certificate of Merit, and an invitation to attend a celebratory banquet at the National PTA Convention in Ohio. Her work will also be featured with other winning entries from the National PTA Reflections Program in a traveling exhibit, beginning on January 13, 2020 at the U.S. Department of Education in Washington D.C. and ending in June 2020 in Louisville, KY. The Reflections Program was started in 1969, and is offered free of charge to participating students.

“We are so proud of Josie and her accomplishment,” said Tonya Rhodes, Utah PTA Region 17 Director. “We appreciate her message that a hero is someone who looks beyond themselves, who lifts those around them. We are so happy her entry was selected to win an Award of Merit on the national level during the 50th anniversary celebration of the Reflections Program through PTA.”