In 1969, a new high school was built to accommodate rapid growth in the southeast suburbs of Salt Lake County, an area now known as Cottonwood Heights.

Perched atop a sloping sandpit with peerless views of the Wasatch Mountains and Salt Lake Valley, Brighton High has been an area landmark ever since. Distinguished by its futuristic, circular designsome say it looks like the Millennium Falcon, though the first “Star Wars” movie didn’t debut until eight years laterthere is no other school quite like it.

A lot has changed over the past 50 years, and the time has come to rebuild the home of the Bengals to meet the educational needs of the modern age. Soon, alumni, students, faculty and staff will bid a fond farewell to the school’s signature circled halls. But not before the community has had a chance to celebrate five decades of Bengal traditions, personalities and history at a 50th Anniversary Celebration on Saturday, July 20. 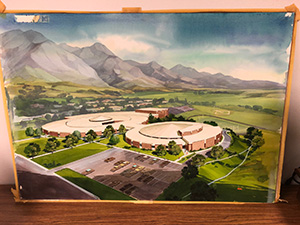 “Over the past half century, the Bengals have embraced their unique identity and forged their own traditions, from ‘Homecoming Olympics’ to the ‘Burning of the B.’ Alumni have gone on to become accomplished scholars, athletes, government and industry leaders, artists, and contributors to their communities,” says the event’s organizer Krista Cullimore. “We felt, on the eve of ushering in a new chapter for the Bengals, that it was important to celebrate this rich history.”

When Brighton was born, the state-of-the-art technology was black and white TV’s. The first cell phones wouldn’t appear for another four years, and written assignments were done on typewriters. But the heart of the school has always been its students who have contributed in both large ways and small to the cultural and technological developments that have reshaped our world.

Fashions and hairstyles may have changed, but many traditions have withstood the test of time. Brighton established itself in athletics in the early 70’smost notably in wrestling, tennis and swimmingand has gone on to win 120 team state championship titles, more than any high school in Utah. The school’s unique American Problems class remains one of the most popular for its mock elections and two-week trial of students living under totalitarian rule. Buoyed by the fact that 42 percent of its students take Advanced Placement (AP) courses and exams, Brighton was recently ranked among the top 15 high schools in Utah by U.S. News and World Report.

“All this speaks to the level of expectations in the community…and an overall focus on achievement,” says Principal Tom Sherwood.

The 50th anniversary event kicks off at 4 p.m. The doors to Brighton will open to allow friends and alumni to wander the halls, enjoy historical displays and reminisce. There will be food trucks, alumni performances and faculty recognitions culminating with a stomp from 7-9 p.m. featuring music from all five decades. Brighton’s 50th will again be celebrated as alumni and students take part in Cottonwood Heights’ Butlerville Days parade over the 24th of July holiday weekend.

Both events are free and open to the public. Take a moment now to register for the alumni association at brightonhigh50.com. Connect with friends on social media by sharing photos, love stories and memories under the hashtag #brightonhigh50. And give reunion planners a shout if you have memorabilia for temporary display or permanent storage in a Legacy Center to be housed in the new school building. 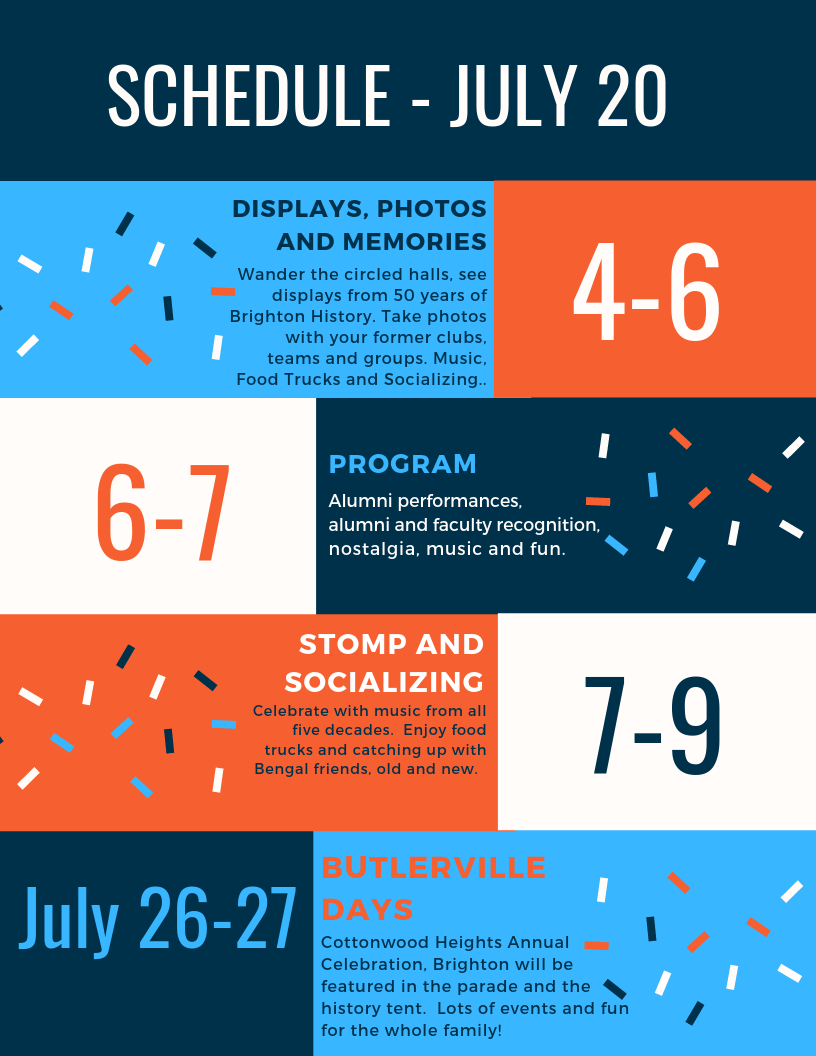