Electronic devicesfrom smart phones to smart watchesafford us many conveniences. But what are the consequences of us becoming more and more reliant on these devices? What are we sacrificing in exchange?

Would you believe, brain power, health and human connection? According to Christy Kane, Ph.D., a counselor with the organization TotumLink, too much screen time is rewiring our brains and leaving a lasting impact on our children’s biochemical and emotional health. But it’s possible through moderation to strike a healthy balance between the use and over-use of electronic devices, she told students and families at a recent Youth Protection Seminar at Jordan High. “Electronic devices are a part of our world and aren’t going away. But we have to be smarter than our smart phones.”

Last month, the World Health Organization announced that infants under 1 year old should not be exposed to electronic screens, and children under the age of 5 should not have more than one hour of “sedentary screen time” a day. The guidelines aim to prevent obesity by helping children to adopt more active lifestyles and better sleep habits. 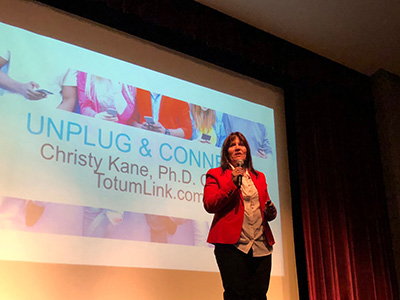 There’s also growing concern about the impacts of TV, video games, computers and smart phones on children’s developing brains. The National Institutes of Health is bankrolling a $300 million Adolescent Brain Cognitive Development study to explore just that. Researchers involved in the study have correlated heavy screen use with changes in the brain and lower scores on some aptitude tests, though the findings are preliminary and experts urge caution in drawing conclusions about causality.

Researchers don’t know how much access to technology is safe for any age group, but based on what’s known about how our brains develop, there’s good reason for concern, Kane says.

To bring the point home, Kane asked the adults assembled in Jordan High’s auditorium, “How many of you have memorized a phone number in the last week? And how many can recite your child’s cell phone number?” Very few raised their hands, whereas 20 years ago, the response would likely have been much different.

“Memorization creates neurological growth, but we don’t memorize anymore. We have become accustomed to having a device be our memory,” Kane says. Neurological growth also happens through tactile activity, such as building puzzles and playing sports and games, through deep human connection and through learning. But so much of what we do, learn and how we connect is now happening through a device.

Getting likes on Facebook or playing a videogame stimulates the brain, but it takes activities, such as learning math or learning to walk, to create the long-term neurological connections needed for our brains to develop, posits Kane. The question families should be asking, she says, is why the devices that have become so integral to our lives are so hard to put down.

Kane will be speaking again at Indian Hills Middle School on Tuesday, May 14. Doors open at 6 p.m. Credit toward “no grades” will be given for high school students who attend with their parents. In addition to Kane’s presentation, educational, counseling and law enforcement professionals will be available at tables to discuss such topics as vaping, school and digital safety and community resources.

Kane will share tips on how families can disconnect from their devices to connect with each other. Among other topics, she’ll discuss: