There’s never a good day to receive a bomb threat. But it’s hard to imagine worse timing for the threat lodged against Sunrise Elementary last year.

It was November on the first Tuesday after the long Thanksgiving weekend, and students were just settling back into a steady routine when the phone rang in one of the classrooms at Sunrise. The person fated to answer the anonymous, blocked call was a substitute teacher. “There’s a bomb set to go off in the cafeteria in five minutes,” was all the caller would say.

The clock was ticking, but Sunrise students were well practiced at evacuating the school. Within three minutes of the phone call and Principal Margaret Swanicke’s immediate evacuation announcement, all 650 students plus employees had exited the building and reassembled at a predetermined location. Everyone was safe and accounted for.

“The kids were calm. They assumed it was a drill and knew exactly how to behave and line up outside,” Swanicke says. “That’s why you do emergency drills, and why you should take them seriously, because you never know when something might actually happen.” 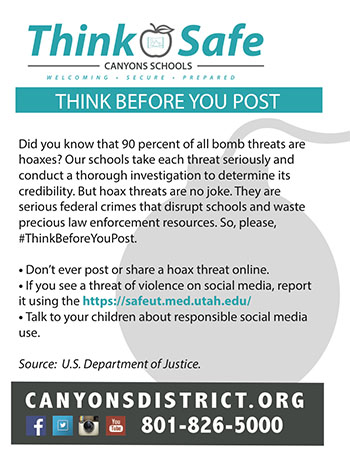 In Canyons District, November is the month for elementary schools to practice responding to a bomb threat. Middle and high schools do lockdown and shelter-in-place drills.

Bomb threats are rare, affecting fewer than 1 percent of the nation’s nearly 99,000 public schools on any given yearand 90 percent are hoaxesas was the case with Sunrise. But hoax threats are no joke.

Since 2014, there has been a 33 percent increase in these types of threats against schools, according to the U.S. Department of Justice, disrupting schools and wasting precious law enforcement resources. “We have to take each threat seriously and thoroughly investigate it to determine its credibility,” says Canyons District Risk Manager Kevin Ray. “What some students might think is an innocent joke can be very costly in terms of instruction-time lost and all the law enforcement personnel who have to respond.”

For this reason, law enforcement agencies are taking hoax threats more seriously and prosecuting them as federal crimes. Canyons District encourages parents to talk to their children about the risk of posting and sharing hoax threats on social media, and urges anyone who sees something unsafe to say something by reporting it through the anonymous crisis and safety tipline SafeUT.

The problem with sharing tips in public forums, such as Facebook or Instagram, is that it lends credibility to false threats and stirs panic in school communities. “There’s nothing that strikes fear in the heart of a parent than to hear their child may be in danger,” Swanicke says. “This is why we have well-established protocols in place for directly and immediately notifying parents of emergencies in as clear and transparent a way as possible. Parents deserve to know about the safety and whereabouts of their children, and keeping everyone informed helps all of us keep cooler heads in a crisis.”

The threat at Sunrise was ruled-out as baseless following a full sweep of the school by police and K-9 units. But as with all such events, it was a learning experience for the District, which updated its emergency notifications to more accurately reflect the steps that students and faculty are trained to take during a bomb threat. The school also made changes to entry and exit points to allow for greater mobility in the event of an emergency.

“The hoax bomb threat wasn’t a planned drill, but it gave us a chance to examine and refine some of our safety measures,” Swanicke says. “This is why we approach each drill as if the emergency were real.”

Welcome Back to School 2014