The job market faced by today’s high school graduates looks nothing like the market of five years ago, and with the pace of change in technology, there’s no telling what tomorrow will bring.

Auto makers are already testing automated driving systems that will reduce the need to hire truck drivers, and computer algorithms are being developed that could one day replace insurance underwriters, financial analysts and even radiologists.

What does career-readiness look like for students coming of age in such a rapidly-changing world? What kinds of skills and knowledge should they be acquiring, and how?

If you asked Jamie Hyneman, co-host of the popular TV show, MythBusters, he’d say that while accessing the right training and schooling is important, the secret to securing a fulfilling career comes down to having the right attitude. “It comes down to resilience, hard work, and self-discovery. Growing up, I discovered if you’re methodical and work hard, you can do anything,” he told high school-age attendees of the 2018 Pathways to Professions Expo, a showcase of Career and Technical Education courses available at Utah’s public schools. His appearance, a question-and-answer session narrated by Utah Lt. Gov. Spencer Cox, was sponsored by Salt Lake Community College. 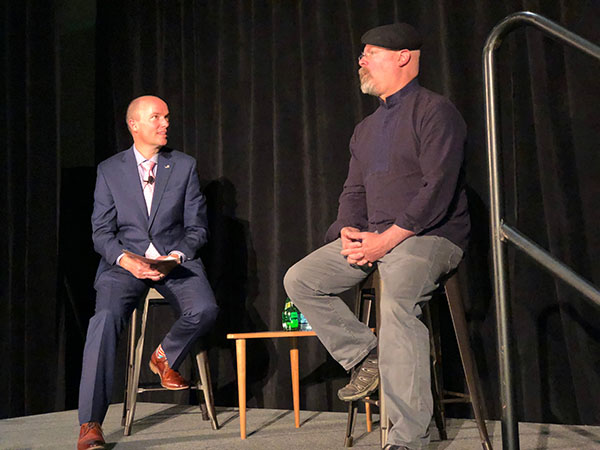 Before he was a TV show host and special effects expert, Hyneman was a man of many trades. In his younger years, he worked as a mountain guide, cook, building inspector, and builder in addition to laboring on farms and in libraries. At first blush, his resume might appear haphazard, or the record of someone who is perpetually distracted.

But Hyneman said he approached each of these occupations like an insatiably curious “forensic scientist” bent on soaking up all the knowledge he needed to master the job. “I didn’t start with exceptional skills. I’d follow-up, and follow through. I’d get my foot in the door, pay my dues and become an asset to the company,” he said.

His advice to students: Find things that interest you, and experiment with thempreferably not with explosives until you’re readybe methodical, and don’t be afraid of failure. “Just be methodical and work hard and it’s amazing what you can do,” he said.

This strategy certainly comes in handy when it comes to orchestrating special effects, busting myths and inventing, which is what Hyneman is doing now for the U.S. military and venture capitalist entrepreneurs. MythBusters was an enjoyable and lucrative side gig that has given him the freedom to choose how to spend his time, he says. “My life now is about going into my shop, locking the door, cranking the music and coming out with something that nobody ever dreamed of.”

Asked by a student attendee when he realized what he finally wanted to do in life, Hyneman said, “I don’t think I’m there yet.”