Sandra Dahlhoulihan was in her office trying to squeeze in some paperwork before school let out for the day when she heard the fire alarm.

“Instinctively, I knew it was the real deal,” says the former Sandy Elementary principal who grabbed her walkie talkie and strode into the hallway where she immediately detected the oaky scent of smoke. The entire school, the staff and teachers, sprang into action and began quickly and calmly evacuating classrooms, sweeping the building and making sure everyone was accounted for.

“Most of the kids assumed it was another drill,” recalls Dahlhoulihan, now an administrator in Canyons District’s Human Resources Department. “It all transpired so fast. You plan for something like this, and hope it never actually happens. But because we had practiced the procedures, everyone knew exactly what to do.”

Happily, school fires have become increasingly rare. Modern construction materials and fire suppression technologies have contributed to a dramatic drop in all structure fires and fire related deaths and injuries in the United States. But these trends, while comforting, shouldn’t lull schools into a false sense of security, says Canyons District Risk Manager Kevin Ray. “Until the risk is zero, schools absolutely need to practice responding to fires.” 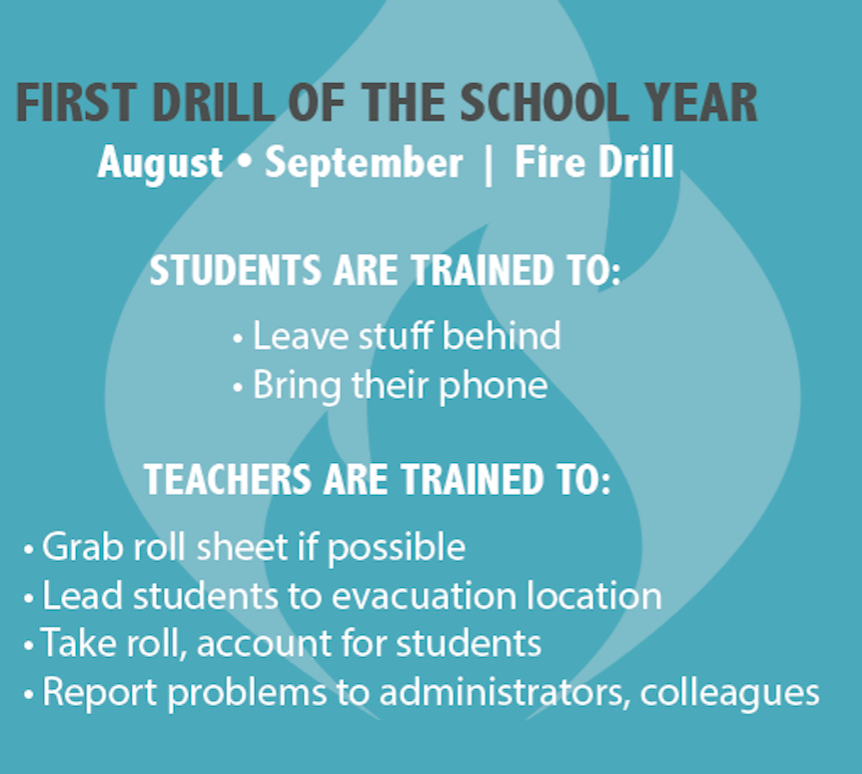 In accordance with state law and Canyons District’s Emergency Response Planand in conjunction with National Preparedness Month in Septemberthe first two months of each school year are set aside for fire drills. In the coming weeks, postcards will be mailed to all Canyons District families with an explanation of what happens during a fire drill and steps the District takes to communicate in emergencies. Canyons also has launched a new “Think Safe” webpage and instructional video with the aim of starting a community conversation about how everyone, from students and teachers to parents, can work together to keep schools welcoming, secure and prepared.

“As any educator or parent knows, children can only learn where they feel cared for and safe. Safety has always been a priority of Canyon District’s administration, and we are continually looking for ways to make our schools even safer,” says CSD’s Superintendent Dr. Jim Briscoe.

All Canyons District schools practice lockdown and shelter-in-place drills throughout the year, in addition to preparing for a host of other threats, from earthquakes to hazardous materials. Secondary schools participate in these drills on a quarterly basis. Elementary schools hold drills at least once a month with fire drills being the most frequent.

An estimated 4,000 school building fires are reported each year by American fire departments, causing 75 injuries on average and $66 million in property damage. Most fires in elementary schools start in the kitchen, whereas in middle and high schools, they are predominantly human-caused and set intentionally or unintentionally by students.

Such was the case at Sandy Elementary where a student, experimenting with a lighter obtained from home, set fire to a coat that was hanging on a coat rack above a recycling bin full of paper. The student had lingered behind classmates who were exiting a computer lab and secretly set the blaze on his way out of the room. It didn’t take long for the flames to spread and trigger the school’s alarm and sprinkling system.

“Most of the damage we sustained was water damage,” Dahlhoulihan says. The District had to suspend school for a day to assess the damage and temporarily relocate two classrooms to the gymnasium. The repairs were substantial and costly, and it took about three weeks before the classrooms were ready for use.

Looking back now, Dahlhoulihan says she learned a great deal from the experience. The fire happened on a Wednesday afternoon in November, 2011. Luckily, the weather that day was unseasonably warm. Had it been chillier outside, or had the fire happened earlier in the day, it would have been more difficult to keep students comfortable and reunify them with families, Dahlhoulihan says. “We would have had to find safe spaces to keep the students warm and occupied and bring in snacks and water.”

Every crisis is unique and brings to light unforeseen snags, which is why it’s important to put response plans to the test through simulated events, or regular emergency drills, Dahlhoulihan says. “After the fire, and another incident we had that year, we developed more detailed plans for clearing and sweeping the building, assisting students with special needs, and documenting the location of our roving support staff. Safety became a priority at our school, and not just for fires, but for anything that could happen.”

What Parents Should Know About Electronics and the Developing Brain

Open Letter to the Alta Community