Gail Miller may refer to herself as an “unwitting businesswoman.” She may be unassuming and understated. But don’t underestimate this quiet titan, activist and philanthropist.

When her husband, Larry H. Miller died from complications of diabetes in 2009, she could have sold the family’s business empire: some 60 car dealerships and a handful of professional sports teams, retail properties, movie theaters, and more. “I certainly didn’t need the headache of running a business that large, and I didn’t need the money,” she recalls. But she felt responsible for perpetuating the family legacy, its founding principles and its philanthropic efforts.

“I am a businesswoman, not because I chose to be one, but because I decided to continue on the path that Larry and I started 39 years ago,” she said Wednesday speaking to a roomful of teen participants in Canyons District’s 8th annual Job Shadow Day. “For as long as I’m able or have anything to say about the Larry H. Miller Group of companies, I will continue to promote the values upon which it was built and continue our commitment to make the communities where we do business better places to live, to work and to play.” 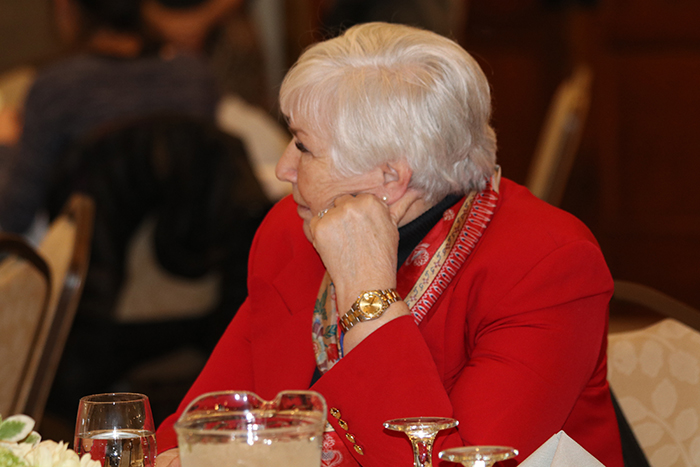 Every year in February, a cohort of CSD students get a chance to spend half-a-day shadowing professionals in fields, such as, marketing, architecture, public works, medicine, or finance and then network with their sponsors over lunch. This year about 100 students and 40 companies took part in the event, which marks the beginning of Career and Technical Education Month.

Gail Miller, who headlined the luncheon at the Gathering Place at Gardner Village, commended the high school-age students for taking advantage of opportunities to test-drive professions before enrolling in college or launching into their careers. Nevertheless, she encouraged them to embrace future unknowns with the curiosity of a lifelong learner. “Learn everything you can everywhere you go, because it isn’t just your schooling that will teach you,” Miller said. “Every experience you have is an opportunity to grow and learn and enrich your life.”

Gail and Larry Miller had five children under the age of 12 when they moved from Colorado to Utah to buy their first dealership. Larry, who gotten his start as a parts manager for a Toyota dealership, “worked hard and I worked hard at home raising the family,” she said. “Every penny we raised, we saved or invested.” With about $80,000 in savings and a loan, the high school sweethearts took a chance  the first of many  and opened their first shop.

Built on a foundation of hard work, integrity and service, their business thrived, and every evening, her husband would come home and give her a detailed accounting of the happenings at work, she said. “I gained a lot of institutional knowledge just by watching and listening. …He was preparing me for a time that I would take on a different role and I would become a steward of our efforts.”

Of course, there were plenty of knowledge gaps to fill after her husband passed away. But guided by a willingness to learn and some foundational principles, which she shared Wednesday with students, Miller found her footing. Aside from steering the company, she has overseen million-dollar philanthropic investments in education and diabetes research and helped manage the transfer of the company’s ownership of the Utah Jazz to a family trust to ensure the team stays in Utah. She sits on numerous prestigious boards and is co-chair of the Our Schools Now ballot initiative that aims to raise taxes to prop up the funding of Utah’s public schools.

Don’t forget your roots, because that’s where your values originate, she told students. Have a long-term plan and work hard to achieve it. Treat everyone with respect. Share what you have and what you know. Learn something new every day. Use money wisely and don’t become a slave to it. Don’t be afraid to lead. “I think fear is something that, especially for women, holds people back,” she explained.

But most importantly, she said, “Wherever you go and whatever you do, do something that makes a difference.” 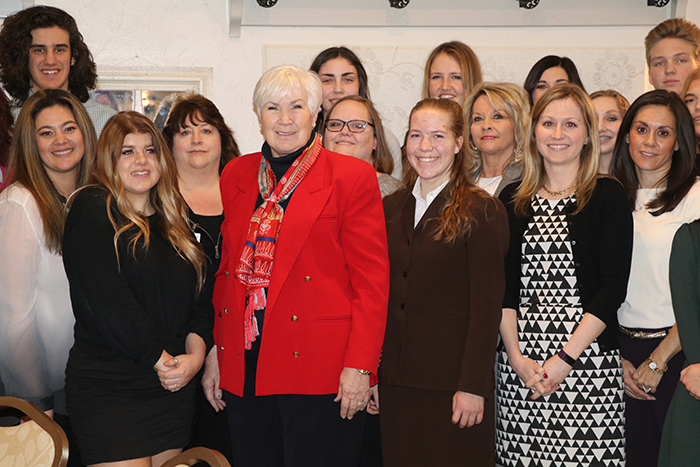