Hope springs eternal as Canyons District, alongside the rest of the world, starts to emerge from literal and metaphorical long and hard seasons of COVID-19, the virus that has upended life and learning for a year.

Cheers erupted at Mount Jordan Middle on Thursday, March 11 at about 7 p.m. — the final moment of the last COVID-19 Vaccination Clinic provided for employees of the Canyons School District.

On this, the last night of the clinic, 297 doses were provided to the last group of CSD educators and Education Support Professionals as part of the District’s effort to inoculate staff against the novel coronavirus.

“Utah schools have done so much to keep our kids safe and keep our kids in schools.  The vaccinations also are a part of that,” said Utah Lt. Gov. Deidre Henderson, who visited the clinic to talk with teachers and Education Support Professionals and applaud them for the essential educational services they have provided to the Canyons community in a year unlike any other.

“We can see the finish line and that is the exciting thing. For a year, we have been playing defense and now we can finally play offense,” said Henderson.  “The thing that I have seen in vaccination clinics that I have visited, including this one, is that there is an emotional thread, a thread of hope — a hope to see their families again, a hope to get back to doing things that we did before … This is what gives people hope.”

Utah Gov. Spencer Cox and Lt. Gov. Henderson have made vaccinating educators and Education Support Professionals a priority as part of the state’s COVID-19 recovery plan. Utah educators were moved to the front of the proverbial line to receive vaccinations when FDA-approved doses became available. Canyons Board of Education members and Canyons Education Association President Erika Bradshaw and Vice President Karen Pedersen also attended Thursday’s clinic to thank Henderson for the state administration’s decision to prioritize the vaccination of teachers and school and support staff.

“The Canyons Education Association is grateful to Utah’s Gov. Cox, who prioritized vaccinations for educators. CEA members have appreciated Canyons School District’s swift and smooth delivery of vaccinations,” she said. “The ability to become fully vaccinated has greatly increased educators’ sense of safety and security while performing our most important function, teaching and mentoring children. This has been a vital step in the fight against the pandemic and a return to normalcy in our schools.”

Canyons District’s COVID-19 Vaccination Clinics began on Thursday, Jan. 14, powered by doses of the vaccine provided by the Salt Lake County Health Department. Every Monday, CSD employees who qualified for that week’s clinic based on their age received an email invite to be vaccinated. Employees due for second doses received invites for the corresponding day.

Employees could accept, decline, or defer to a later date if they were, for health or other reasons, unable to make their assigned time. Every effort was made to use every dose provided to the District by local health officials, who weekly divided a limited amount of vaccines among the five school districts in Salt Lake County. Vaccinations were provided on an ongoing basis until all of Canyons employees were given the opportunity to get their shot in the arm.

Unlike many parts of the country, Utah schools have largely remained open for robust in-person learning. In Canyons, there have been temporary pivots to online instruction in response to rising COVID-19 case-counts, but for the most part, since August, students have been given unfettered access to educational programs, social-emotional supports, and extracurricular activities. In fact, high school musicals in recent weeks have completed their runs; CSD student-athletes captured state titles in football, wrestling, and swimming; and the spring sports seasons started earlier this week.

This fall, CSD parents were provided three learning options as part of the CSD’s Back-to-School Action Plan:  In-person, online, and at-home, parent-guided, CSD-supported learning.  Those who returned to the classroom did so under strict safety and health protocols, including mandatory mask-wearing.

Canyons Superintendent Dr. Rick Robins lauded employees for stepping forward when asked to be among the first in Utah to receive the shots in the arm. “We are known for being pioneers and being trailblazers,” he said.

District records show that 91 percent of Canyons District Administrators chose to receive the vaccine. Eighty-three percent of licensed personnel received the shots, and 66 percent of eligible CSD Education Support Professionals chose to receive the vaccine at a CSD clinic. All tallied, 73 percent of eligible and interested Canyons employees participated in the District’s vaccination clinics, which have been held every Thursday since Jan. 14.  As a caveat, there may be some employees who were eligible — but were able to be vaccinated sooner elsewhere.

“I am so overwhelmed with pride and appreciation for our employees. The way they have stepped up to be vaccinated and a part of this,  it is an honor to be their teammate,” Dr. Robins said. “Their spirit and their attitude to keep our kids in school and really fulfill our promise to our kids.  I am honored to be their superintendent.”

Elizabeth Rooklidge, a school counseling student who is doing her practicum at Draper Park Middle, was the final Canyons District employee to receive a vaccination. “It is so exciting and I so appreciate the opportunity to receive the vaccine,” she said.  “I knew it was important to keep our kids safe.”

Brandon Wolf, president of the association of CSD Education Support Professionals, noted the work of support staff to keep schools open. Under strict protocols, rooms have been cleaned, meals made, and bus routes safely completed, among so many other tasks done daily.

“They say that it takes a village to raise a child. Schools are certainly a part of that village, and it takes everyone, from teachers to custodians to secretaries to bus drivers, to make sure every student is provided a world-class education in Canyons District,” he said.  “Thanks to the COVID-19 Vaccination Clinics, which were open to all eligible CSD employees, we can move forward safely in our commitment to making our schools and our communities as strong as they can be. We appreciate all of the Education Support Professionals who put trust in science and received their vaccinations to be safe at work and home.” 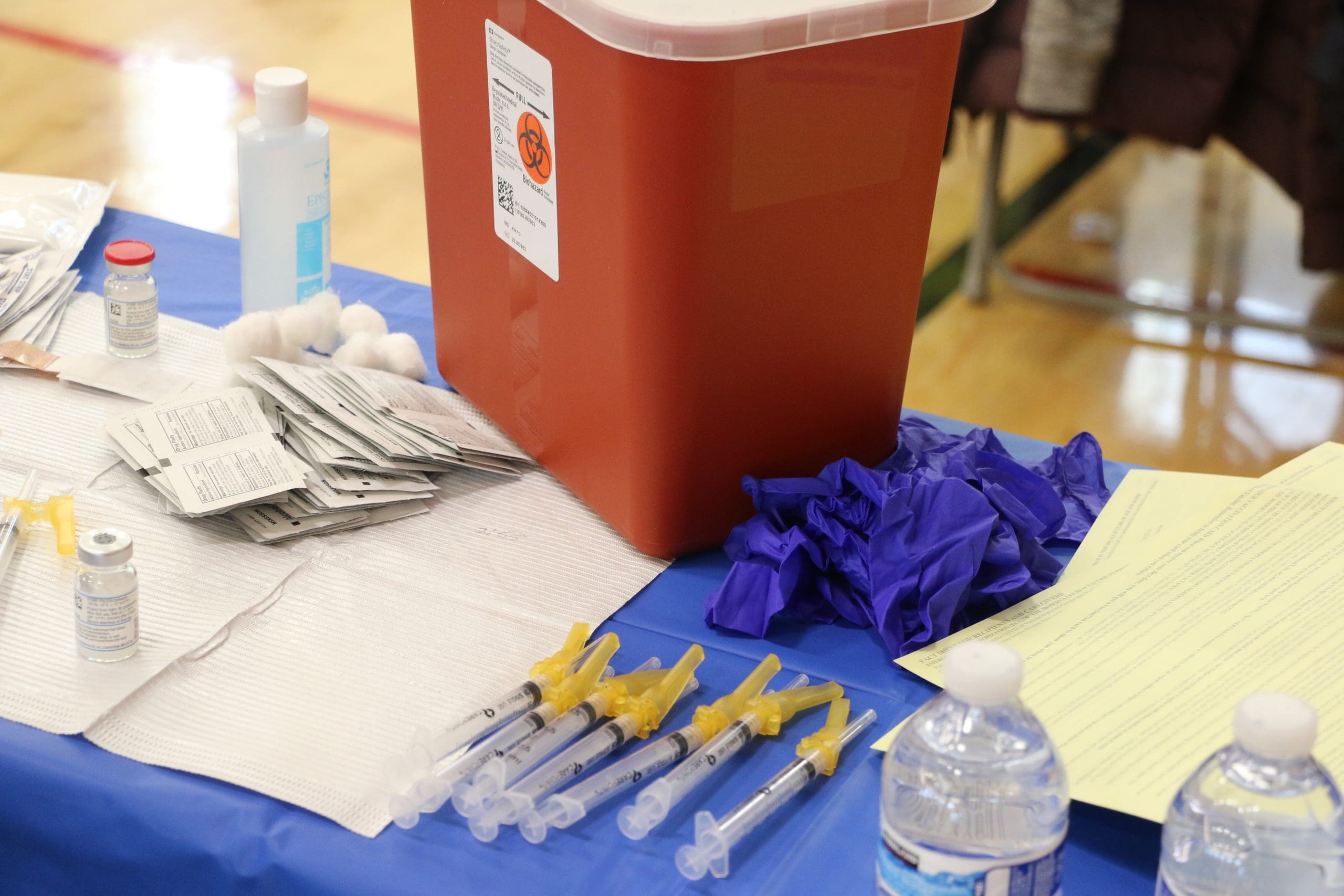