But it doesn’t have to be. For eights years, Canyons District’s middle schools have opened their doors to incoming sixth-graders a day early to allow them to orient themselves and ease into their new surroundings before the official start of school. “It’s a great tradition. We’ve found that it really cuts down on the nerves and the tears and helps students get acclimated,” Mount Jordan’s new principal Cindy Hansen told a KTVX reporter who profiled the event.

With elementary school, and all of its colorful comforts a distant memory, it’s important to give first-timers a primer on things, such as, opening stubborn lockers and using their school planners.

At Albion Middle’s half-day orientation, students were greeted by trumpets as they walked a red carpet and received high-five’s from their teachers. At Union Middle, math teacher Stephanie Knighton reminded her class, “You know there’s no recess? There are four minutes between classes  we’ve been giving you five today.”

Students arrived in time to hear the morning bell ring. They sat through shortened versions of all their classes, giving them a chance to walk the hallways and see how much time it takes to get from one class period to the next  or to find the cafeteria, restrooms and gym. Some schools heldintroductory assemblies and handed out snacks to tide over grumbly bellies until lunch. Students met their teachers and made new friends. “They’re just in awe of the newness of it all,” Midvale Middle assistant principal Kerry Schroeppel said as his students filed into the cafeteria to have an Otter pop and learn the rules of the cafeteria. “There’s no reason to be scared, and that’s what we try to instill in them with our enthusiasm. We are excited for this new year and we are excited for them to feel that.”

As Mount Jordan students filed out to catch their busses, an announcement rang out, “Thanks for being with us today. We look forward to seeing you tomorrow.” 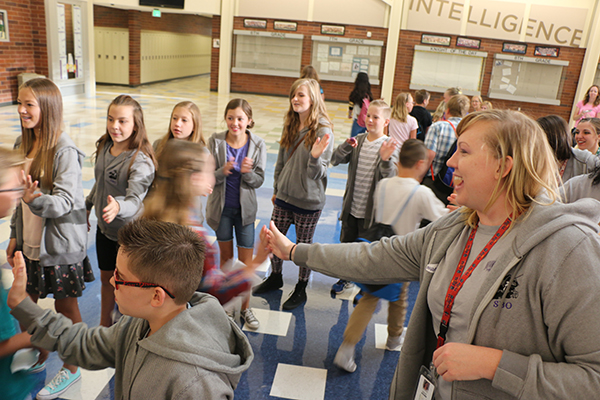 Six Reasons to be Thankful for Public Education