When this experience is over, Oakdale students will know far more about Korean culture than just the “Gangnam Style” song and dance. For the past week, Oakdale students and teachers have been playing host to six teachers-in-training from South Korea’s Busan National University of Education who are in Utah to watch and take notes on the instructional and engagement practices of American schools.

Oakdale Principal Alice Peck says it’s been delightful to interact with the Busan students, who have quickly become part of the school community. In “nearly flawless English,” Peck says, the delegation from the Land of the Morning Calm has taught students some traditional games, as well as how to utter names and phrases in Korean. “They have just joined right in,” Peck says, “They just love the kids.”

The Oakdale visit, which ends Feb. 7, has attracted favorable attention from the highest-ranking officials at the Busan University. The school’s president, Sang-Yong Kim, visited Oakdale on Monday, Jan. 28, 2013, bearing gifts of appreciation and friendship. The university forged the relationship with Oakdale when the son of one of its professors attended the school while his father was on sabbatical in Utah.

The student, Soo Wan Kim, attended Oakdale for two years before returning to Korea. Peck said his former classmates were disappointed that Soo Wan couldn’t return to see them when his father, Dong Kyoo Kim, a professor in the English Education Department, made this week’s ceremonial visit with President Kim. “The students were like, ‘Hey, where’s Soo Wan? Is Soo Wan here?'” Peck said. “I think it was nice for Soo Wan’s dad to hear that his son is missed here at Oakdale.”

Peck said President Kim was in Utah solely to visit the Busan students, who have been busy working with teachers throughout the Sandy school. Oakdale students from the first to fifth grades have enjoyed the classroom presence of the Busan educators, whose trips were funded by the university.

Peck said it’s been fascinating to exchange ideas with the Korean guests, who plan to give Peck a report on what they learned while observing Oakdale classrooms. Korean teachers, for example, teach intensively for 40 minutes. Then, the students and teachers take a 10-minute break. That pattern is repeated throughout the day.

“We have been happy to compare and have some great conversations,” Peck said. “None of the conversations have been about finding fault or determining whose way is better. It’s been so that we can learn from each other.” 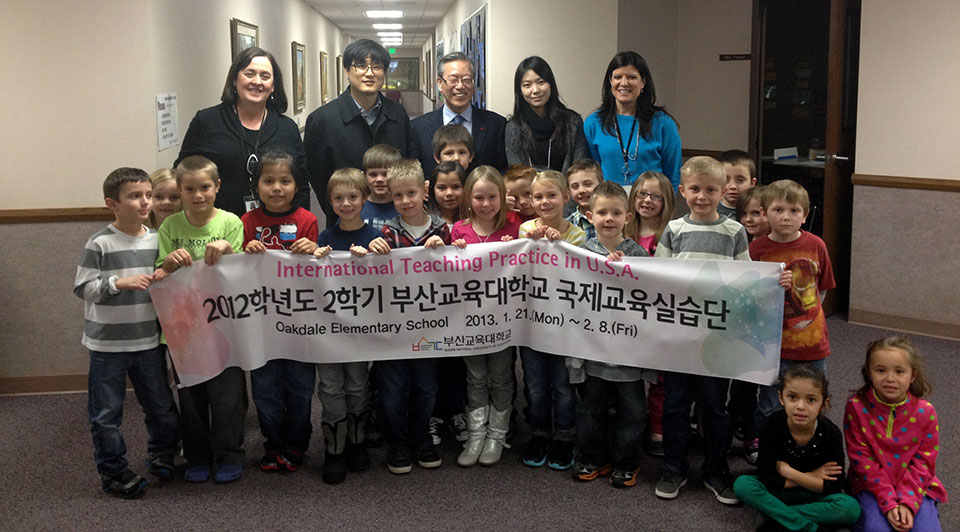