The recent wave of temblors along the most active portion of the Wasatch Fault are a timely reminder of why our schools prepare for earthquakes.

Canyons District’s schools prepare for the inevitability of this and other natural (or not so natural) disasters by conducting regular emergency drillsand April is the month for earthquake preparedness. CSD schools will join emergency responders, hospitals and businesses throughout the state in participating in the Great Utah ShakeOut on April 18. The 10:15 a.m. disaster-planning event is also a great way for families to prepare to survive and recover from catastrophic calamities. 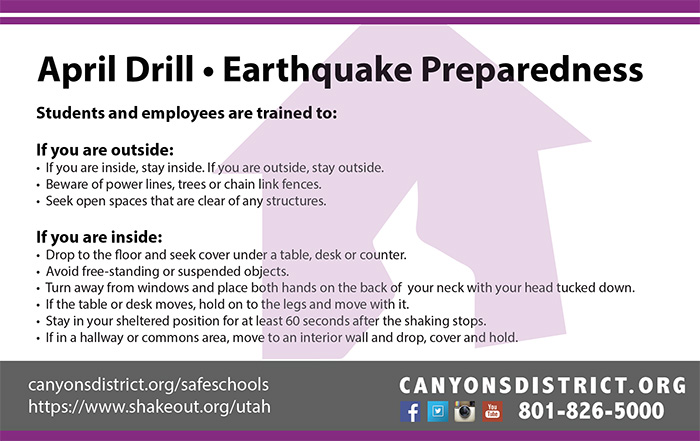 Emergency management experts agree that when the Earth starts rocking and rolling, “drop, cover and hold,” is the appropriate action plan to reduce injury and death. “Families should also take time to identify a safe place outside the home to meet after the shaking stops, and designate a family member outside the state to serve as a chief contact person to relay information,” says CSD’s Risk Management Coordinator Kevin Ray. “And, of course, all families should have food and water stored, and 72-hour kits equipped with flashlights, important documents, and first aid materials.”

The safety and welfare of children is a communitywide priority in Canyons District where schools work hand-in-hand with cities, first responders, non-profit groups and citizens to safeguard neighborhoods and prepare for emergencies.

In partnership with the American Red Cross and local governments, Canyons participates in the S.A.F.E. Neighborhoods Program. SAFE  an acronym for Schools Aid Families in Emergencies  trains community volunteers to mobilize as a neighborhood until outside help arrives. The idea behind it is to build the capacity of neighbors to help neighbors in the 96 hours immediately following a catastrophic event, the amount of time that it can take for first responders to reach those in need.

In the event of a major emergency, elementary schools become hubs for communities to gather and organize. All of our elementary schools store a large black tote containing maps and radio frequencies  everything that CERT teams, ham radio operators and other do-gooders need to set up a communications hub, begin search-and-rescue operations and reunify families.

Start of school delayed until Aug. 24 in response to teacher, community concerns