After Stephanie Johnston was nearly killed in a terrible traffic accident in 2007, she was grateful to have her life.

But in sustaining a severe traumatic brain injury in the accident, Stephanie lost a lot. She lost her favorite pair of jeans, her favorite t-shirt, and worst of all, she lost her confidence and the ability to believe in herself. A junior at Brigham Young University at the time, she was told she would likely not finish school and couldn’t participate in the sports she loved. The simplest cognitive tasks seemed insurmountable. “Oh, to be average again,” Stephanie says when she looks back on the struggles she went through. 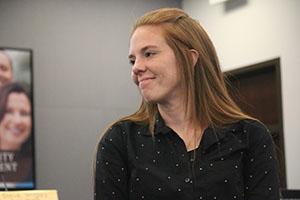 The lessons she learned and the support of others, however, helped set her on the path to becoming the Utah School Counselor Association’s 2018 Rookie Counselor of the Year. It propelled her to finish her degree, then receive a Master’s degree, and pursue a career in student counseling so that she could support others in the way she was supported.

At Hillcrest High, Stephanie has been a superstar right out of the gate. According to Principal Greg Leavitt, she is one of the hardest workers at the school. She is dedicated to meeting students on their level as she works with them and uses every means necessary  including technology  to communicate with them. She understands their hardships and she is dedicated to helping each student move through their own journey in life.

Upon receiving the Rookie of the Year award, Stephanie thought back on how far she has come since that night over a decade ago. “To me, this award simply means that I have been doing everything in my power, even when the cards were stacked against me, which is all we can ask of our students when the cards are stacked against them,” she said. “Students need someone who believes in them, and I hope, one student at a time, one small moment at a time, I get to do that for them.”