The unique “bridge courses” will be taught in high school but are being offered for college credit as part of Utah’s Dual Language Immersion Program, which is challenging traditional models of educational delivery and bridging the gap that has separated K12 schools from institutions of higher learning. Different from concurrent enrollment offerings, Brid 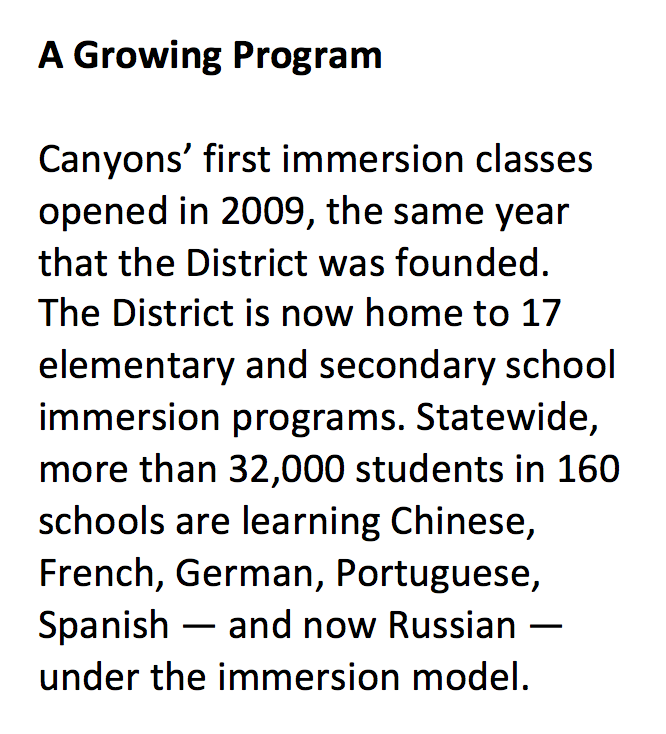 ge Courses are for upper division (3000 level) credit, and as such, give students a healthy head start on a minor or major in their language of study.

“Dual immersion is putting pressure on our system of higher education to provide something that is not the same as has been provided in the past, and it’s a healthy pressure,” says Jill Landes-Lee, who directs the Bridge Program Advanced Language Pathway for the U.’s Second Language Teaching and Research Institute.

Dual immersion students spend a good portion of their instructional days learning a world language. They start as early as kindergarten or the first grade, and by the time they reach the 10th grade, their language proficiency is comparable to that of upper division university language students in their junior or senior year. To ensure they don’t lose ground and are able to continue to grow in proficiency, the state’s institutions of higher learning have committed to offer them college-level courses while they are still in high school  which is no small feat, says Landes-Lee. “As a university, we had to ask, ‘How do we support a student as young as 15 years of age?’ We also had to contemplate how to take a semester-long university course and extend it over a full year. We’re not just throwing another course into the high school sequence. It’s not just another elective.”

Dual immersion is catching on nationally as an effective and efficient means of achieving fluency in a non-native language. But no other state has articulated a K16 model like that being pioneered in Utah, says CSD’s Secondary Dual Language Immersion Coordinator Cassandra Kapes. “We are so thankful for the Legislative funding that is making this possible, and to be working with the state’s flagship university.”

Bridge courses, created in partnership with all of Utah’s colleges and universities, are already being offered at Jordan High in Spanish. Next year, Chinese and French will be added at Corner Canyon and Alta, and by the 2019-2020 school year, all of CSD’s five traditional high schools are projected to be offering the courses.

The courses will be co-taught in the high school setting as part of students’ regular schedules by a high school faculty member and a faculty member from the U., says Kapes. In order to enroll, students must pass the Advanced Placement (AP) Language and Culture Exam with a 3 or above in the ninth or tenth grade. Students can earn 3 credits per year, and up to nine college credits total  for just $5 per credit  giving them a jump on college and competitive edge in the global job market.

Dual immersion is coming of age, and bridge courses are the culmination of a vision for a biliterate, bilingual and bicultural Utah that was articulated years ago by former Gov. Jon Huntsman, Sen. Senator Howard Stephenson, R-Draper, and Rep. Eric Hutchings.

Participate in a ‘Twitterlogue’ About The College Experience