Within the Canyons School District community, Gretchen Murray needs no introduction. Her name is already associated with excellence in education, which is why she was nominated for Teacher of the Year by her peers and the parents of her Peruvian Park Elementary students.

The announcement was made at a banquet featuring remarks by Gov. Gary Herbert and Deputy State Superintendent of Public Instruction Rich K. Nye. As second runner-up, Murray received a check for $3,000 among other prizes. The state title went to Valerie Gates of West High. Jody Tolley, an American Sign Language teacher at Skyline High, took second.

{source}
<!– You can place html anywhere within the source tags –>

Gretchen Murray jokes that she was an explosives expert before deciding to become a teacher. She grew up in a family of educators but fell into a marketing career at a commercial explosives company  a job that fed her wallet, but not her soul.

Seeing her dissatisfaction, Murray’s aunt invited her to drop by her classroom one afternoon.  It was love at first sight. Happily  for the many students at Peruvian Park Elementary she’s influenced  Murray quit her job, enrolled in a master’s of education program, and never looked back.

The first day of school in Murray’s classroom starts in a very specific place: the floor. That is where the Peruvian Park Elementary teacher sits in a circle with her students and allows each child to talk about a time when someone hurt their feelings. For every harsh word uttered, students pound a nail into blocks of wood. Then, as the circle is repeated with positive words and the nails are removed, Murray points out that a hole still remains. “We don’t make holes in our class,” she tells her students.

In Murray’s class, integrity, responsibility and commitment are the norm. Her students consistently make significant progress, as 86 percent of the class scored in the 90th percentile of the M-COMP evaluation this winter, compared to 27 percent in the fall.

Earlier this year, Murray was diagnosed with breast cancer for which she received chemotherapy. She is now cancer-free. But taking a break from teaching wasn’t on the agenda for this devoted educator who says her two young children and her students are what keep her going. Each day, even on the tough ones, she starts her SALTA class with a stirring injunction to make the most of every moment, as her students learn to solve multi-faceted problems, think critically and learn self-mastery.

“One of the eight keys of excellence in my classroom is ‘This is it.’ And what that means is that this moment is the only moment we can control in our life,” she says. “We can’t change the past and we can’t control the future.  We can be in the present. This is it. This is the only one we get. So let’s have some fun with it, even when it is hard.” 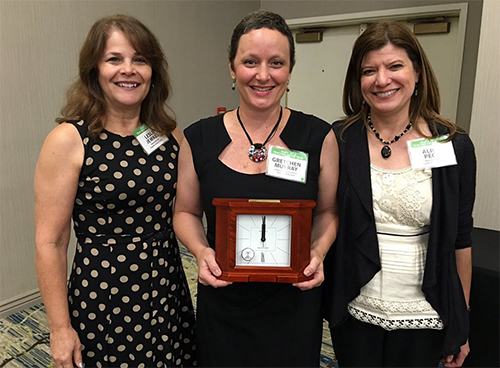 A Student’s Award-Winning Reflection on Heroism

Canyons Installs Life-Saving AEDs In All Its Schools