Of all the variables in education, one thing is certain: Teachers matter. A quality teacher influences student performance more than any other aspect of schooling. But Utah, one of the fastest growing states in the country, is in the throes of a teacher shortage. Faced with this reality, and the need to fill an annual average of 280 open teaching spots over the past five years, the Canyons Board of Education is doing its part to elevate the teaching profession by bringing salaries in line with those of other professionals in Utah, making it possible for teachers to pursue their passion, and do what they’re good at, while also earning a living wage.

Under a tentative agreement with the Canyos Education Associationwhich was publicly announced on April 23 at the District’s Teacher of the Year ceremonystarting this fall, all Canyons District teachers would receive a $7,665-per-year salary increase. Representing a double-digit increase for every teacher, this would put the starting teacher pay at $50,000.

Public Comment
On April 23 during a special meeting set aside each year to recognize Canyons District’s Teachers of the Year, the Board announced it had reached a tentative agreement to raise teacher salariessignaling the start of a months-long public comment period that culminates with a Truth-in-Taxation hearing on Aug. 6 at 6 p.m. in the Board chambers at the Canyons East-Administration Building, 9361 S. 300 East in Sandy. This meeting will be live-streamed, and there will be over-flow seating in an adjacent room. Public comment will be limited to three minutes per individual unless there are more than 15 patrons desiring to provide input, in which case comments will be limited to one-and-a-half minutes per patron.

Questions or comments also can be emailed to communications@canyonsdistrict.org using the button below.  Please submit your input via this email address if you cannot attend the Truth-and-Taxation hearing but would like your voice to be heard.

How will this combat the teacher shortage?
Enrollment in teacher training programs at Utah’s colleges and universities is on the decline, and more teachers are leaving the profession each year than are entering the classroom. In Utah, 42 percent of teachers quit after five years in the classroom, according to a joint study by the State Board of Education and the Utah Education Policy Center. The biggest reason teachers leave, according to a recent survey of teachers by Envision Utah: low pay. The hope for this pay increase is that this will not only make it possible for Canyons to attract high quality teachers but that it will incentivize college students who are actively considering career options to give more careful consideration to becoming a teacher. We also hope this encourages the more than 14,000 teachers who have current teaching certificates in this state, but who do not teach, to consider re-entering the profession.

How does teacher pay in Canyons compare to that of similar districts?
The proposed pay increase would put the starting teacher pay at $50,000. This starting salary would tie for second highest among Utah’s 41 school districts. 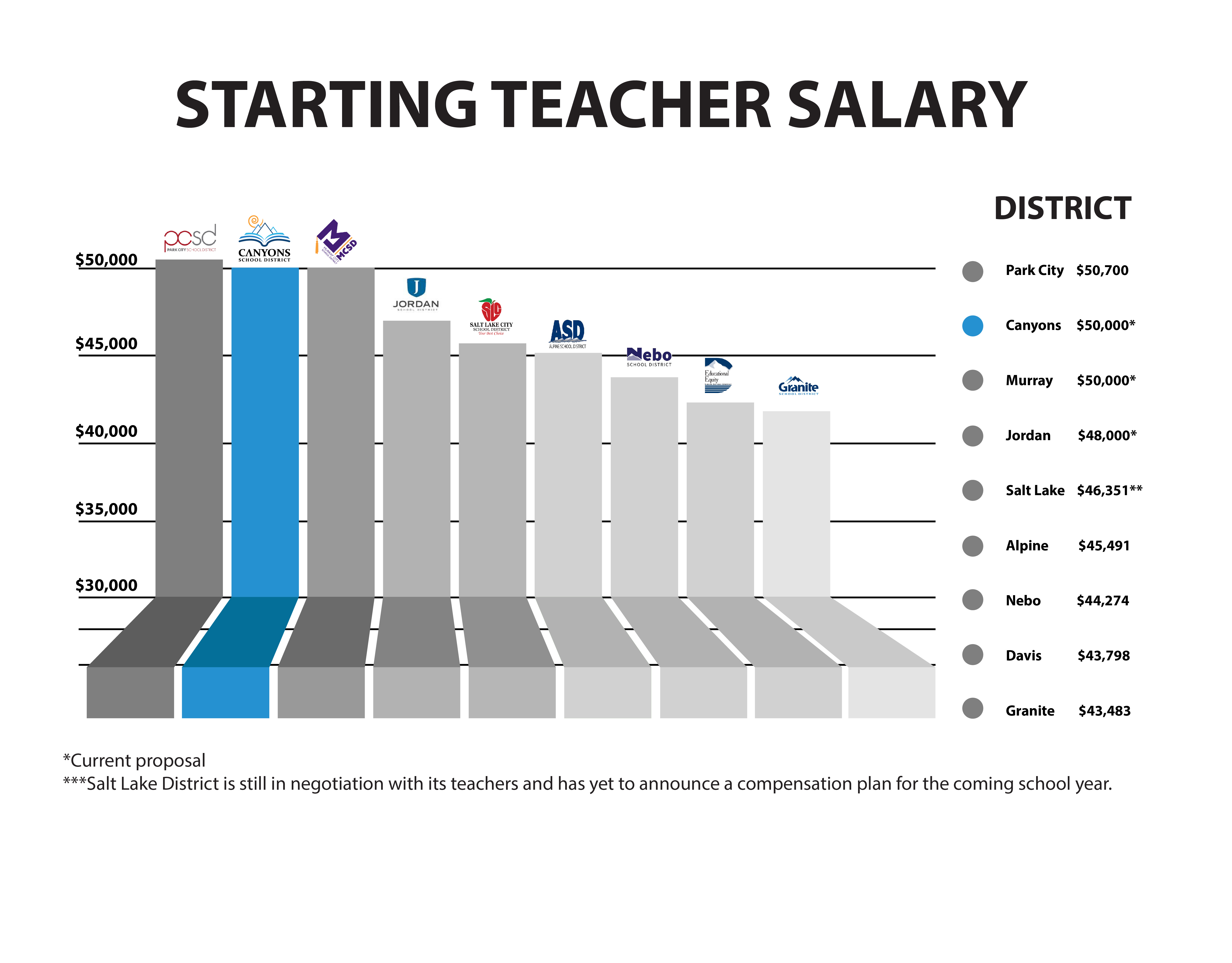 How will Canyons fund the salary increase?
Of the $19.6 million required for this salary increase, $13.750 million will come from funds generated by a property tax increase. The remainder will come from attrition, cost-cutting, and a legislatively-approved 4 percent increase in per-pupil spending. All revenue generated through the tax increase will only be used for teachers’ salaries. This is the first time in Canyons’ 10-year history that the District has sought to recoup inflation through a tax increase.

How will this impact my taxes?
The exact amount for each home is shown on the property tax notices mailed by the Salt Lake County Auditor in late July. The annual tax increase for the average home in Canyons District (valued at $421,000) would be $140.32. That’s about $12 per month.

When was the last time the Canyons District Board of Education raised taxes?
When Canyons was first established in 2009, the District held a Truth-in-Taxation hearing to establish a base rate. But this is first time in Canyons’ 10-year history that the District has sought to recoup inflation through a tax increase. 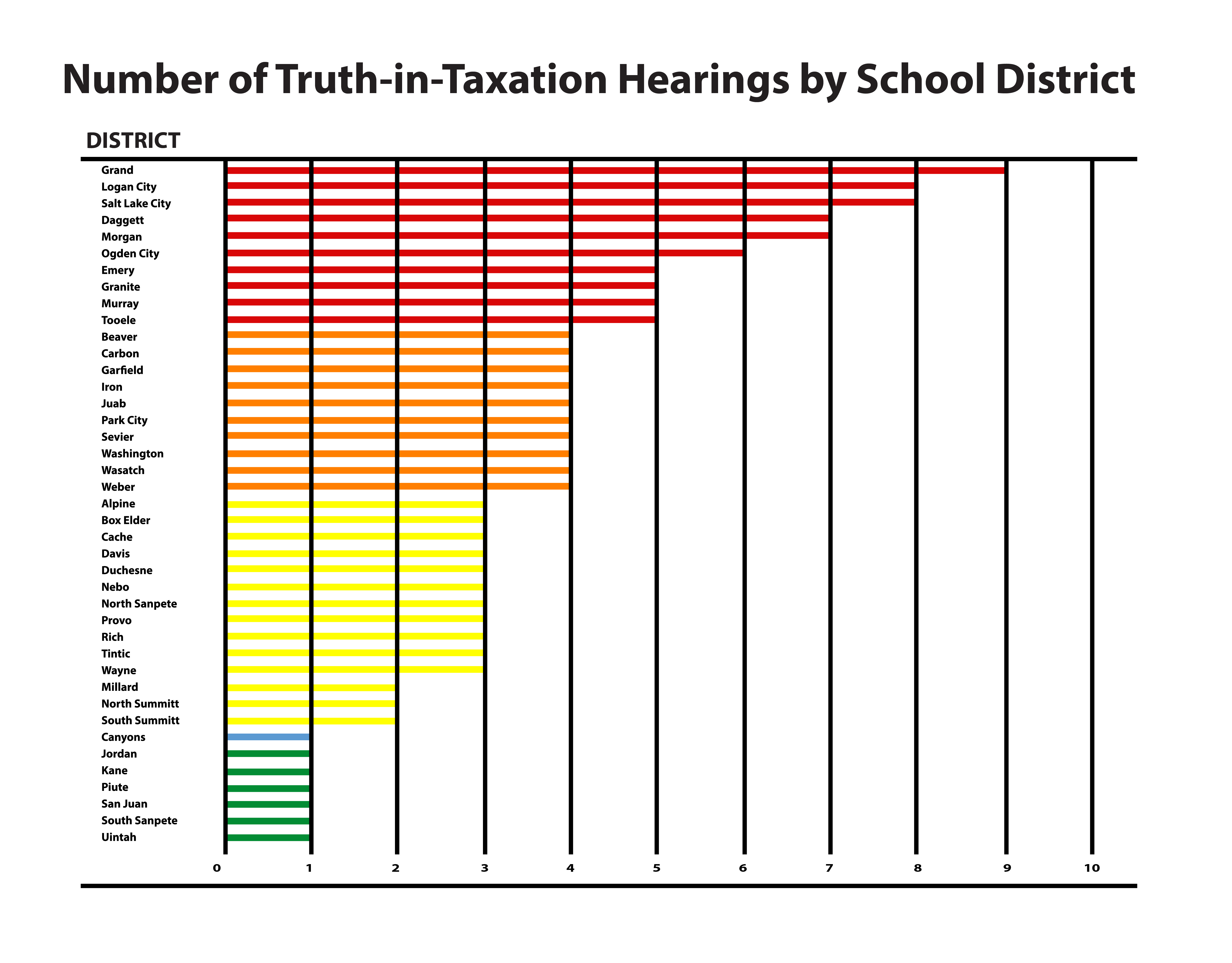 Why does the tax rate have to be raised? Doesn’t the amount of taxes collected increase over time as property values rise?
In Utah, property tax rates are automatically adjusted to compensate for swings in property values. This adjusted tax rate is called the certified tax rate. As property values rise, the certified tax rate falls so as to keep neutral the amount of revenue generated from year to year. This system, as designed by the state Legislature in 1985, allows local governments and school districts to draw the same amount of revenue as budgeted the previous year. However, the certified tax rate does not capture inflation. In order to recoup any inflationary losses that accrue from year to year, local governments, including school districts, must raise the certified rate through the Truth-in-Taxation process. This is the first time in Canyons’ 10-year history that the District has adjusted the certified rate through the Truth-in-Taxation process to recoup inflationary losses. Note: Even with the proposed adjustment to the certified rate, the District’s overall tax rate will still be lower than in was as recently as 2015.  The District’s tax rate also would remain lower than that of several school districts along the Wasatch front, including Granite, Davis, Nebo, Tooele, and Ogden.

How come you don’t use money from the bonds to increase teacher pay?
Taxpayers approved the bond proposals so the District could improve the physical condition of schools.  This is what bond proceeds can be used for.  We cannot use bond funds on ongoing expenses like salaries. Both of Canyons’ voter-approved bonds were tax-neutral.

Why are we still paying Jordan School District debt? When will this come off our taxes?
In 2003, voters in the then-Jordan School District approved a $281 million bond to renovate buildings. However, in November 2007, communities in Cottonwood Heights, Draper, Midvale, Sandy and Alta voted to create a new school district, which eventually became Canyons District. Although no longer part of Jordan, Canyons taxpayers still are required by law to pay a significant portion of Jordan’s previous bond debt. Over a 13-year period Canyons taxpayers will pay $215.9 million toward this debt. There are three years remaining on the debt with $12.0 million due in 2020, $10.6 million due in 2021, and $9.8 million due in 2022. The debt will then be retired. It should be noted that only 3 percent of the total bond proceeds were spent on schools that are now in Canyons District.

What relief is available for homeowners on fixed incomes?
We appreciate that some of our patrons who are living on fixed incomes struggle to afford even modest property tax increases. In their foresight, the Utah Legislature has created a Circuit Breaker Tax Abatement program through which property owners can apply for tax relief. The following property owners are eligible for relief:

Information on how to apply for a reduction or abatement in property taxes can be obtained from the Salt Lake County at: https://slco.org/treasurer/tax-relief-applications/circuit-breaker/.  The deadline for application is September 1, 2019.

What else is Canyons doing to hire and keep good teachers?
We want teaching to become a destination profession, not a stepping stone to something else. If we want our most venerated educators to stick around, and today’s college students to regard teaching as a viable career through which to build a life and raise a family, we need to elevate the teaching profession. Doing so takes more than a shift in attitudes and beliefs. It entails offering teachers competitive compensation packages, and providing them with the opportunities, and training, to grow professionally. In Canyons District, it boils down to creating an inclusive culture, increasing compensation, and strengthening school communities.

Ski and Shred’ with CSD at Brighton Ski Resort