By day, Stacy Kurtzhals is an administrator on special assignment supporting Canyons District schools. But on evenings and weekends, she transforms into “Ninja Momma.”

Both of Kurtzhals sonsTyler, 14 and Cooper, 10are highly-ranked Ninja Warriors who have qualified to compete this February in the National Ninja League (NNL) World Championships in Hartford, CT. Cooper, known as the “Type 1 Ninja” for his efforts to raise awareness of diabetes, is newer to the sport than his brother, but is climbing the ranks of the NNL and Ultimate Ninja Athlete Association. Tyler, otherwise known as “TK Ninja Trickz,” is the top competitor in Utah in his age group, and was chosen to compete on the popular television show American Ninja Warrior Junior. The family traveled to Los Angeles last summer to film the episode, which will first air in March on the Universal Kids Channel.

“It’s a good thing my husband has to travel for work because he has lots of frequent-flier miles,” says Kurtzhals, ticking off the list of competition venues they’ve visited throughout Utah, and as far west as Oregon and far east as Michigan. And when they’re not driving to competitions, they’re practicing at a growing number of local gyms and on the obstacle course their Dad built in their backyard.

“It’s really fun. I’ve become totally addicted,” says Kurtzhals whose philosophy in education and in life is to “support young people in exploring and pursuing their unique talents and passions.”

Indeed, it was Tyler’s obsession with the Ninja Warrior show that launched the family on their warrior quest. “He’s really self-driven. He was nine years old and wouldn’t stop watching the show or hanging on things in the backyard. Every playground we visited, he turned into a ninja course,” Kurtzhals says. So, his father, Zak, installed a pull-up bar in the home and told Tyler that if he worked to build up his strength, he would construct an obstacle course in the backyard.

The massive structure has graced the Kurzhals’ backyard for three years now and just keeps growing, as do Tyler’s and Cooper’s strength, agility and interest in the sport. The entire family is engrossed in all-things Ninja, such as the “ninja-bread” course that Tyler made over the holidays in place of the traditional gingerbread house.

But Tyler’s experience taping the American Ninja Warrior show has evolved into other interests, too, Kurtzhals says. “He had so much fun being interviewed by media for the TV show that he’s taking a theatre class this year,” she says. 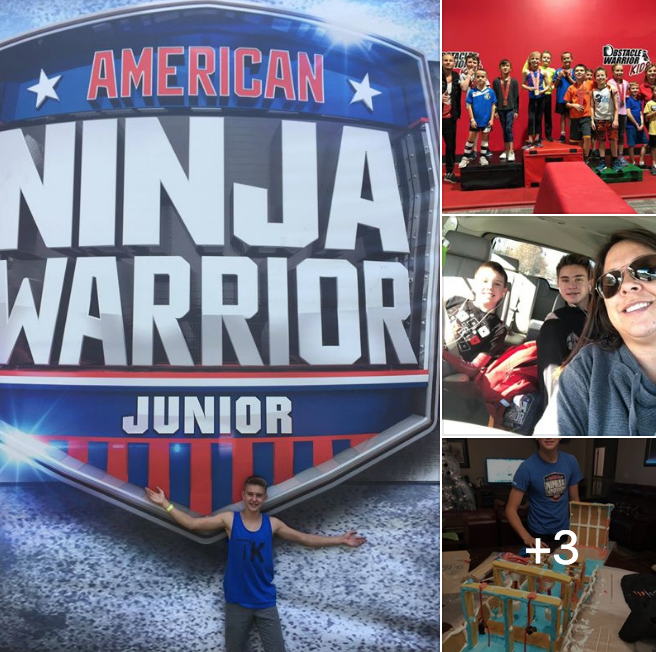