Canyons District has about 5.8 million square-feet of space to keep cleaned, which is accomplished each day with s 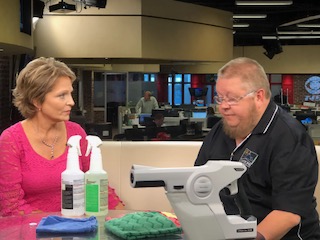 pecial attention paid to touchpoints, or highly-trafficked areas with which students come into direct contact, such as door knobs, computer keyboards, and drinking fountains.

“There’s a lot more to this than vacuuming and emptying trash cans,” Todd Muir, a custodial trainer for Canyons, explained to audiences of Good4Utah and KUTV2News on Sept. 10, 2018.

Deep-cleaning to combat specific illnesses also focuses on touchpoints, but entails using specialized chemicals and tools, such as electrostatic sprayers, which can envelop an entire area with a bug-fighting coating of disinfectant. Canyons’ custodial experts also use micro-fiber towels that are 200 times more effective than cotton terry towels.

Of course, parents can help by reminding children of the importance of good personal hygiene. The best way to stop th

e spread of norovirus, which causes diarrhea, nausea, stomach pain and vomiting, is to thoroughly wash hands after using the restroom and before preparing meals or eating meals.

Students or employees who are symptomatic should stay home for at least two days after symptoms stop, according to the U.S. Centers for Disease Control. Following is some helpful information courtesy of the Utah Department of Health.

How do I know if I have norovirus?

How does norovirus spread?
Norovirus is spread by infected people or contaminated food and water. The virus is found in stool and vomit. You may get norovirus if you:

How soon after exposure do symptoms usually appear?
Most people will begin to have symptoms within 1 to 2 days, but some people may become ill as early as 10 hours or as late as 3 days.

How long do symptoms last?
Persons with norovirus usually recover within 2 to 3 days without serious or long-term health effects. Even though the virus is easy to spread, serious illness rarely occurs.

What is the treatment?
No specific treatment is available. People should drink plenty of clear fluids. Rarely, people may become sick enough to go to the hospital. There is no vaccine available and antibiotics should not be used.