They could have spent the summer relaxing poolside with friends, playing video games, or earning babysitting money. Instead, they chose to get a jump on high school with a deep-dive into the math and science concepts they’ll be expected to learn as entering freshmen this fall.

For four hours a day over four weeks, participants in Jordan High’s AVID summer academy immersed themselves in what it takes to be a successful Beetdigger. They attended class, conducted experiments, and completed exams while becoming familiar with the new surroundings, new teachers, and more rigorous demands of high school. For their efforts, on Friday, June 13, they were awarded cash stipends and completion certificates, and treated to a celebratory breakfast with family members. 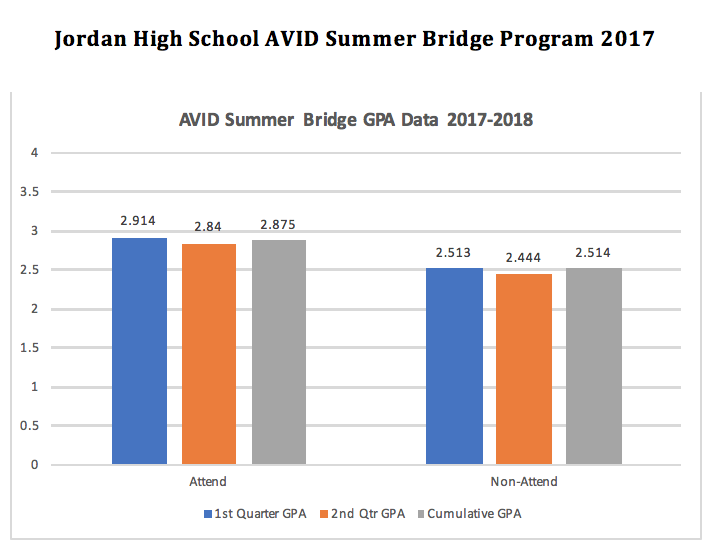 More valuable, stillthey learned that they’re capable of doing hard things, and that it feels pretty good. “This summer, you’ve shown that you can do something really important,” remarked Canyons Board of Education member Steve Wrigley at the ceremony. “Believe in yourself and work hard and it will open all kinds of doors for you.”

Made possible with an investment by the Board of Education, and modeled after a similar program at Hillcrest High, the AVID summer academy is now in its second year. Participants in last year’s academy ended their ninth-grade year with higher grade point averages than those students who were invited to the program but chose not to participate (see chart below). They reported having more confidence and also attended school more regularly.

“We didn’t have any of our participants who were falling into dangerous areas of missing a lot of school, which is something that prohibits students from being successful,” says Jordan’s Principal Wendy Dau.

How students perform in the ninth grade tends to predict how well they’ll do in high school. The idea behind the AVID program, says Dau, is to help students excel that first “sink-or-swim” year, and beyond.

Last year, the approach earned CSD the honor of being named a 2017 District of Distinction by District Administration Magazine. One of Utah’s largest newspapers called the initiative a “smart, sensible and innovative” approach “to dealing with a specific problem  one that happens to be at the heart of any education system’s principal mission  to make sure students who show up on the first day of school are still there when the bell rings on graduation day.”

A Guiding Light in Tough Times – Thank You, Principals!

Budding Scientists To Vie For Honors At CSD Science Fair