Corby Eason’s childhood wouldn’t be described as carefree or idyllic. Drug deals, burglaries and violence were common in the Columbus, GA neighborhood he called home. But he says his life experiences in those formative yearsespecially, the enduring love of his motherstill guide him today in his student support practices as a counselor at Midvale Middle School.

“Being raised by a single mom was the best thing that ever happened to me. She taught me resilience,” says Eason, the 2016 winner of the Utah School Counselor Association’s (USCA) Human Rights Award. The award is given to counselors w 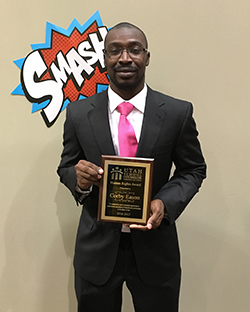 ho have exceled at reaching underserved populationsand is one of two USCA awards bestowed upon Canyons District counselors this year. Sallie Matson, a three-year counselor at Corner Canyon High, was named 2016 Rookie of the Year.

Eason graduated from Brigham Young University and worked at a residential treatment center and at West Lake High in Saratoga Springs before coming to Midvale Middle. At West Lake he started a Parent Diversity Equity Committee to advocate for minority students and at Midvale Middle, he created a mentoring program for young men of color 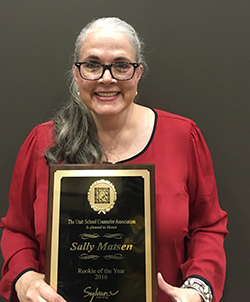 Matson, also a champion of at-risk populations, has shown remarkable leadership early in her career. “During one week in the fall, the District crisis team lead was out of the office and we had three schools who needed crisis management help. I had no qualms about calling Sally and having her be a support team lead at one of the schools,” said her counseling lead Tori Gillett.

Eason and Matson were both honored at UCSA’s annual conference in October. Both work feverishly to meet the needs of struggling students, and are exemplary of the level of professional excellence espoused by Canyons School District and its employees, says Gillett.